Many veterans of our armed forces find themselves in need of estate planning assistance but are unable to afford legal counsel. To meet this need, Baylor Law School is hosting its annual Veterans Day Wills Clinic, providing pro bono estate planning aid for local veterans and their spouses.


Making a Difference for Veterans

During the wills clinic, which is held at Baylor Law School, students handle intake and gathering of information to prepare wills, powers of attorney, and directives to physicians. Second and third year law students then draft the documents with three levels of attorney supervision and input, culminating in the execution ceremony weeks later at Baylor Law School.

While Baylor Law's Veterans Day Wills Clinic is an annual event, serving veterans and their spouses is a year-round mission. The Baylor Law School Veterans Clinic provides pro bono legal advice to military veterans and their spouses at monthly legal clinics held at the Heart of Texas Veterans One Stop in Waco. At the clinics, Baylor Law School students and faculty work together with local lawyers to serve the veteran population of over 16,000 residing in McLennan County, many of whom cannot afford to hire an attorney. These clinics help instill a culture of community and service in Baylor Law students: the desire to use their legal training to help others. 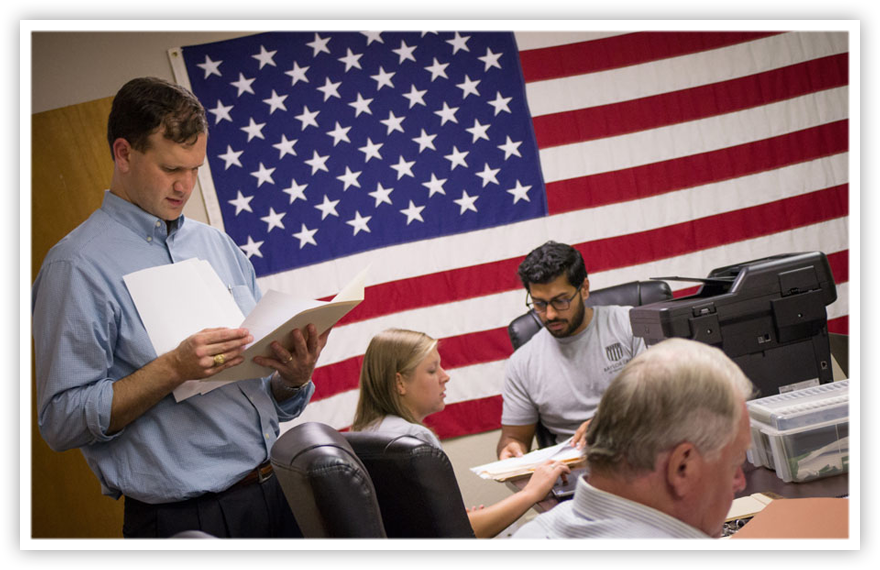 In 2015, Army Gulf War veteran Edward Leslie contacted the Veterans Clinic. After he moved out of a local apartment complex, Leslie's landlord would not return his original $500 security deposit after seven years as a tenant. Baylor Law School sent a demand letter to the owners, but the letter was ignored. Baylor Law student Javier Cabanillas, supervised by a licensed attorney, sorted through the evidence, drafted the petition, and filed it with the court. When the owners also ignored the lawsuit, Leslie took a default judgment for statutory damages. He then collected the full amount of the judgment from the owners -- $1,716.00 -- which was over three times the original deposit.

Leslie, who assisted in the capture of Panamanian dictator Manuel Noriega, was delighted with the results. "I would like to thank the Baylor Law School Veterans Clinic for all the professional help and outstanding work that was done with my case," he said.

Baylor Law's Veterans Clinic is also committed to serving the spouses and widows of military veterans. Earlier this summer, the Veterans Clinic obtained the dismissal of municipal ordinance code violation charges for the surviving spouse of a Korean War veteran in Rosebud, Texas. The fine was over $4,000.00 -- a staggering sum for a grandmother raising four young grandchildren on less than $2,000.00 per month. The case was set for jury trial and law student Allen Waddell, a combat veteran who has his third year bar card, assisted in trial strategy, preparation, and the drafting of a motion for a directed verdict. Much to the widow's relief, the prosecutor dismissed the case on the eve of trial.

The American Bar Association highlights the need for programs like the Baylor Law School Veterans Clinic in the 2016 "Report on the Future of Legal Services in America." This report found that more than 100 million low and middle-income Americans are unable to afford legal representation for cases relating to basic human needs. Basic human needs are defined in the report as cases related to shelter, sustenance, safety, health, and child custody. Alongside civilians are 21.8 million military veterans, many of whom cannot afford to see a lawyer. "The lack of access to lawyers and the courts is a rule of law issue, and this 'access to justice gap' is of significant concern to lawyers across the country," said Stephen Rispoli, Assistant Dean of Pro Bono Programs. "Our Veterans Clinic is a significant step taken by Baylor Law School to address the needs and issues outlined in the ABA's Report. We are honored to have the support of the Texas Access to Justice Commission so that we can help address the access to justice gap and serve one of the most deserving constituencies in our society."

The Baylor Law School Veteran Clinic is funded primarily by a grant from the Texas Access to Justice Commission. Baylor Law School Professor Bridget Fuselier, who founded the program in 2012, said: "We are incredibly grateful to be able to provide meaningful legal services to veterans in our community. With the grant from the Texas Access to Justice Commission," she continued, "it is possible to have a full time attorney like Josh Borderud working with our students and achieving positive results. Josh has been a tremendous addition to this program and the students and veterans are benefitting from his commitment to serving others."

If you are a veteran with a civil legal issue, please contact the clinic at 254-710-4244 or Veterans_Clinic@baylor.edu. The Veterans Clinic is located at the Heart of Texas Veterans One Stop at 2010 La Salle Avenue in Waco, Texas.

ABOUT BAYLOR LAW SCHOOL
Established in 1857, Baylor Law School was one of the first law schools in Texas and one of the first west of the Mississippi River. Today, the school has more than 7,400 living alumni. It is accredited by the American Bar Association and is a member of the Association of American Law Schools. Baylor Law School has a record of producing outstanding lawyers, many of whom decide upon a career in public service. The Law School boasts two governors, members or former members of the U.S. House of Representatives and the U.S. Senate, two former directors of the FBI, U.S. ambassadors, federal judges, justices of the Texas Supreme Court and members of the Texas Legislature, among its notable alumni. In its law specialties rankings, U.S. News & World Report ranked Baylor Law's trial advocacy program as #4 in the nation. Baylor Law School is also ranked #55 in the magazine's 2017 edition of "America's Best Graduate Schools." The National Jurist ranks Baylor Law as one of the "Best School for Practical Training," and #4 in the nation in its most recent "Best Law School Facilities" listing. The Business Insider places Baylor Law among the top 50 law schools in the nation. Baylor Law School received the 2015 American Bar Association Pro Bono Publico Award, making it only the third law school in the nation to be honored with the award since the award's inception in 1984.