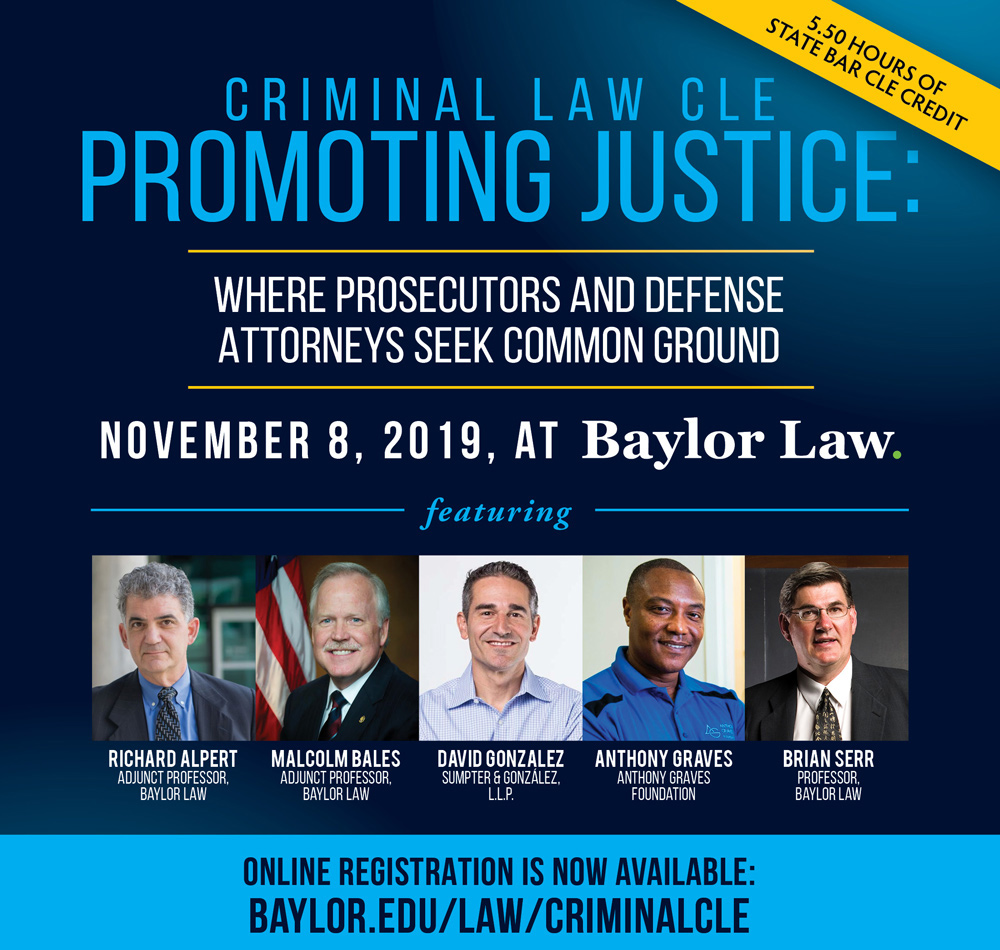 Presented by the Baylor Law Alumni Association and MCCDLA

Portions of this program dealing with Criminal Law and Ethics/Professional Responsibility are approved by the Texas Board of Legal Specialization for credit toward the continuing legal education requirements for certification and recertification in those respective fields.

Refunds
Refunds, less a $25.00 fee, will be granted only if they are requested in writing and received the day before the program by mail or fax (254-710-1264). Registrants who do not attend or timely request a refund will be sent a copy of the course materials.

Richard Alpert is currently working as a lecturer, instructor, and legal consultant with focus on alcohol and drug related crashes and trial advocacy training to aid in the professional development of prosecutors and law enforcement professionals in Texas and throughout the United States. He is also employed as a member of the Adjunct Faculty at Baylor Law School.

Malcolm Bales graduated from the University of Texas at Austin School of Law in December 1980. He was admitted to the Texas Bar in 1982. He worked briefly as an attorney for the law firm of Hancock Piedfort in Austin, Texas and served five months as a Judge Advocate General (JAG) attorney in the United States Navy. He resigned his commission to become a Special Agent in the Federal Bureau of Investigation (FBI) in September, 1982. He worked as a field agent in the San Antonio, Mobile, and Chicago field offices. In Chicago, he investigated several public corruption cases, most notably the "Greylord" case. He resigned from the FBI in February 1989 and joined the U.S. Attorney's Office as an Assistant United States Attorney (AUSA) in the Eastern District of Texas, Beaumont Division.

Bales was assigned to the OCDETF (Organized Crime Drug Enforcement Task Force) unit for the Eastern District of Texas and worked complex narcotics cases until he became the Deputy Chief of the Criminal Division and OCDETF Lead Attorney in 1993. He continued to investigate and prosecute cases as well as lead the five person OCDETF group until May 1995 when he accepted a position as an AUSA in Denver, Colorado. In Colorado, he worked in the general crimes division for three months, but happily returned to the Eastern District of Texas to work as the one AUSA assigned to the new Lufkin Division office in 1995.

In Lufkin, Bales worked on a general crimes docket which included OCDETF cases and some significant white collar crime cases. He was named Chief of the Criminal Division, effective January 26, 2003. During his first week as Chief, the space shuttle Columbia came down in pieces over east Texas and Bales helped establish the federal command post. In the fall of 2006, Bales returned to the line. He helped prosecute a sitting Jefferson County ADA for fraud, the murderer of an inmate at the USP Beaumont, and a corporation accused of numerous instances of deep water pollution. The latter case resulted in a $37 million fine, at that time, the largest in history for a maritime pollution case. Bales also successfully prosecuted a $70 million Ponzi scheme.

Bales received two Department of Justice (DOJ) Sustained Superior Achievement Awards in 1989 and 1992. He has also been recognized on several occasions for his case accomplishments by the Drug Enforcement Administration (DEA), the FBI and numerous other law enforcement agencies. In 1995, the East Texas Peace Officers’ Association awarded him its annual Award of Excellence and in 2014, its Leadership Award. In 2004 he received the J. Michael Bradford Memorial Award from the National Association of Former U.S. Attorneys, and in 2007, he was the recipient of the Attorney General's Distinguished Service Award for his work on the OSG maritime pollution case.

In April 2008, Bales was appointed as the Deputy Criminal Chief over Narcotics; he became the Criminal Chief again in February, 2009. Following the resignation of the previous U.S. Attorney, he was appointed to serve as the United States Attorney on May 1, 2009. Some two years later, President Obama nominated Bales to fill the position. The Senate confirmed the President's nomination on September 26, 2011 and Bales served as United States Attorney until his retirement from government service in October, 2016. Bales began his service as an adjunct professor at Baylor Law in 2018, hoping to impart some experience from his days in the Department of Justice. More importantly, he is excited to be a part of the outstanding legacy of service to others that is so integral to Baylor Law School.

For 20 years David M. Gonzáles has practiced criminal law in Austin with his wife, Corinne Sumpter, and a dedicated group of lawyers and social workers. For over a decade he has served as legislative counsel for the Texas Criminal Defense Lawyers Association. His contributions to public policy are informed by his work in federal and state criminal defense, his trial and appellate practice, and serving six different counties as a Special Prosecutor in serious cases. He routinely testifies before the House and Senate committees on criminal jurisprudence.

In matters of concerning the Michael Morton Act, David was part of the Legislative Team responsible for drafting the bill that created a statutory Brady component. In matters regarding the ethical duties regarding exculpatory, impeaching, and mitigating evidence, David serves on the Board of Disciplinary Appeals that authored the opinion in Schultz v. Commission for Lawyer Discipline.

David is a graduate of Dartmouth College and Stanford Law School, and he is the recent recipient of the 2018 Federal Bar Association’s Advocate of the Year and the 2017 Austin Bar Association’s Professionalism Award. He is also an adjunct professor teaching trial advocacy at the University of Texas at Austin School of Law.

Anthony Graves is a criminal justice changemaker and the founder of the Anthony Graves Foundation, and outreach organization established to benefit underserved communities by implementing preventive and substantive community based initiatives including: Re-entry in place of health care, mentorship, community outreach, and legal assistance.

Anthony Graves spent 18 ½ years incarcerated for a murder he knew nothing about. Twelve of those years were spent in hellish conditions on Texas’ Death Row. He was freed and exonerated on October 27, 2010. Today, Anthony brings optimism and his unique perspective to the challenge of reforming our broken criminal justice system.

Through multiple execution dates and the challenges of keeping his soul intact, Anthony saw the worst that Texas had to offer. He was railroaded by police officers and Texas Rangers who fabricated evidence, lied in court, and manipulated witnesses. He endured a prosecutor -now disbarred for what a federal court called “egregious prosecutorial misconduct” - who hid evidence, bent the law, and pursued an unjust death sentence.

In prison, Anthony reflected on a broken system that allows young men and women to languish under harsh sentences. Every night on Death Row, he planned for the day he’d walk out of prison a free man. He planned to bring change to a system so often unfair to those who come before. He planned for the Anthony Graves Foundation and the good work it is doing today.

After graduating summa cum laude from Dana College in 1981 with a bachelor's degree in mathematics and a minor in coaching, Brian Serr wasn't sure he wanted to leave the basketball court for the courtroom. After being named to various small college all-star teams, there was an opportunity to play pro basketball in Denmark, but Copenhagen was a long way from his increasingly unrealistic NBA dream, both geographically and athletically. There was a more well-traveled route to a lifetime of basketball — a career as a high school math teacher and coach, perhaps the only career path discernable from his college course work. And there was law school, an option gently suggested to him by his parents, a Lutheran minister and a kindergarten teacher, who were both familiar with their son's penchant for arguing them into exhaustion.

Reluctantly setting his hoop dreams aside, Serr headed to law school. His law school classmates first knew him as “that tall guy who wears a sweatsuit to class,” and he was usually the first one in the gym every afternoon. Somehow, he found enough time to study that he graduated near the top of his class in 1984. But despite his law degree, or perhaps in part because of it, Serr was quickly on a path that would lead him back to teaching, coaching, and even quite a bit of basketball.

Professor Serr took a position as a legal writing instructor and LL.M. candidate at the University of Illinois, pausing first to pass the bar and squeeze in a basketball trip to England to play with a touring team of college players. The following summer, after completing the LL.M. program at Illinois, he went back to Europe with a college coach to put on several basketball clinics in Belgium. Upon returning to the states, he moved to Houston to clerk for the legendary John R. Brown, Chief Judge of the United States Court of Appeals for the Fifth Circuit throughout much of the civil rights era. Serr still considers his time with Judge Brown to be the most valuable learning experience in his legal career, and that job also opened a door at Baylor Law.

At Baylor, Professor Serr has come full circle back to his original interests — teaching, coaching, international travel, and a little basketball on the side. He teaches courses in criminal and constitutional law. He has been recognized for his commitment to teaching by Baylor University (Most Outstanding Faculty Member in Schools of Law, Business, Engineering & Computer Science, 2002) and by The Texas Lawyer (honored in 2003 as “The Most Influential Professor” on the most highly regarded law teaching faculty in Texas). Serr has also coached for 32 years in the law school's nationally known advocacy program. In national moot court competitions, his appellate advocacy teams have recorded five national championships, one national second-place finish, and five national third-place finishes. His teams have also won numerous regional competitions.

Teaching law has also contributed to Professor Serr's passion for international travel. He won a Fulbright Scholarship in 1994 to teach a course in American law at Vytautus Magnus University in Kaunas, Lithuania. He was awarded a fellowship in 2001 to attend an international conference on human rights in Salzburg, Austria. In 2007, he served as a delegate to a rule of law conference in St. Petersburg, Russia. And from 1996-2011, he was the director of the law school's international summer program in Guadalajara, Mexico, where he also taught courses in human rights. Currently he teaches in and administers the "School of Appeal" as part of the law school's Academy of the Advocate, a summer program in St Andrews, Scotland. Of course, Professor Serr doesn't need a professional reason to travel overseas. One of those obnoxious “country counters,” he has now visited nearly 50 countries.

Shortly after arriving at Baylor Law, Serr worked with several students to start a Sunday night basketball league, a law school institution that lasted nearly 20 years. He competed against “20-somethings” in that league for, well . . . way too long. As his basketball skills diminished, his need for competition was fulfilled by an active appellate practice. Professor Serr has briefed and orally argued cases in both the United States Supreme Court and the United States Court of Appeals for the Fifth Circuit. He won a decade-long civil rights case involving police brutality, a case that established important precedents in the area of municipal liability for the improper hiring and/or inadequate training of police officers. Three times he has been asked to represent The Conference of Chief Justices (composed of the Chief Justices of all 50 states) in United States Supreme Court cases. His work on one of those cases, which ended with the Supreme Court upholding the constitutionality of the states' primary funding vehicle for providing legal services for the poor, earned Serr one of the American Bar Association's top pro bono awards. He has worked on constitutional issues for a diverse array of clients, including federal agents injured in the fateful raid on the Branch Davidian compound, a murder defendant in a federal capital prosecution, and the American Football Coaches' Association.