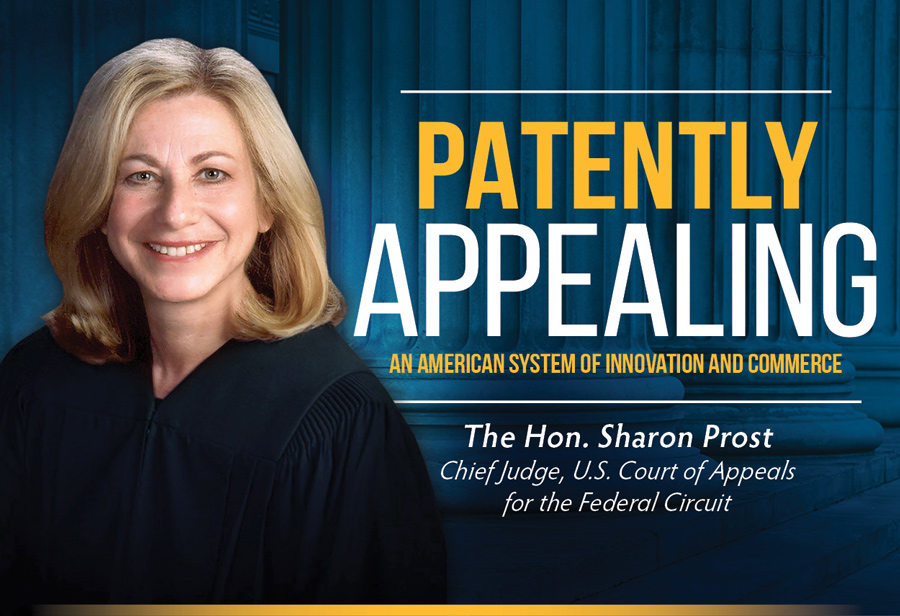 "Patently Appealing:
An American System of Innovation and Commerce"

The public was invited to hear Chief Judge Sharon Prost speak at Baylor Law on current topics of interest regarding the American patent system and the ongoing challenges and responsibilities of her Court. As a part of her remarks, Chief Judge Prost was joined by Chief District Judge Rodney Gilstrap of the U.S. District Court for the Eastern District of Texas, a member of the Baylor Law Class of 1981 and the 2018 Baylor Lawyer of the Year.

The U.S. Court of Appeals for the Federal Circuit sits in Washington, D.C. and is the exclusive venue for all appeals within the federal court system relating to patents. Patent trials in federal courts from Maine to California are appealed to this Court where Chief Judge Prost presides among 11 other federal circuit judges. The impact of this Court and its rulings reach the entire American system of innovation and commerce and is watched closely from an international perspective as well. The Federal Circuit also hears appeals regarding cases involving international trade issues, veterans claims, and other specific areas of jurisdiction.

This course has been approved for Minimum Continuing Legal Education credit by the State Bar of Texas Committee on MCLE in the amount of one credit hour.

Sharon Prost was appointed to the Federal Circuit by President George W. Bush in 2001 and assumed the duties of Chief Circuit Judge on May 31, 2014. Prior to her appointment, Chief Judge Prost served as Minority Chief Counsel, Deputy Chief Counsel, and Chief Counsel of the Committee on the Judiciary, United States Senate from 1993 to 2001. She also served as Chief Labor Counsel (Minority), Senate Committee on Labor and Human Resources from 1989 to 1993. She was Assistant Solicitor, Associate Solicitor, and Acting Solicitor of the National Labor Relations Board from 1984 to 1989. She was an Attorney at the Internal Revenue Service from 1983 to 1984, and Field Attorney at the Federal Labor Relations Authority from 1980 to 1983. Chief Judge Prost also served as Labor Relations Specialist/Auditor at the United States General Accounting Office from 1976 to 1980 and Labor Relations Specialist at the United States Civil Service Commission from 1973 to 1976. Chief Judge Prost received a B.S. from Cornell University in 1973, an M.B.A. from George Washington University in 1975, a J.D. from the Washington College of Law, American University in 1979, and an LL.M. from George Washington University School of Law in 1984.

Chief Judge Prost has spoken at many national patent law conferences and has represented the American Patent System in international settings around the globe. She is recognized not only as an accomplished thinker and writer in the areas of innovation and patent law, but she is also an outstanding speaker whose presence is sought around the nation.