The Texas Lawyer’s Creed encourages attorneys to commit to an effective pro bono program and to ensure that all persons have access to competent representation. In response, Baylor Law has created a culture of pro bono service. Baylor Law consistently emphasizes the importance of service in the profession. To help prepare our students for the practice of law, our clinical and pro bono programs were created with a focus on practical legal training.

By volunteering in clinics and other pro bono programs, our students see the impact of their efforts working alongside Baylor faculty and volunteer lawyers. It may be the first time that they see how the law they have learned in class applies to real problems involving real people. Many experience deeper understanding of the subjects they have studied. These experiences often solidify their calling to be a lawyer, and create the impetus to continue to serve throughout their careers. 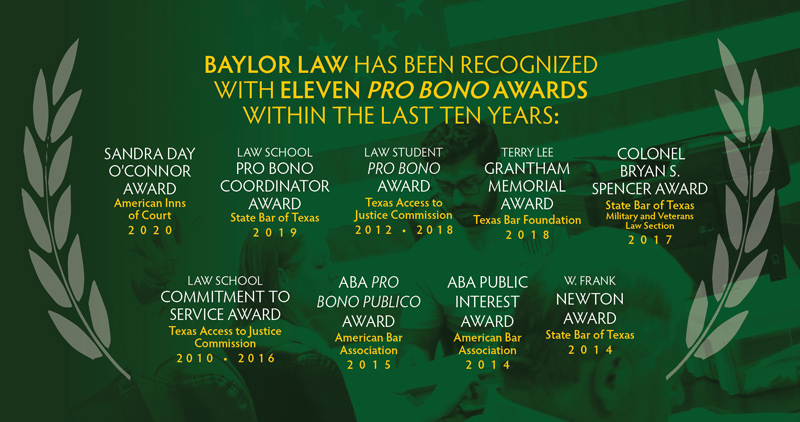 Over the past several years, we have received significant recognition for our clinical and pro bono programs. These awards demonstrate the commitment that the entire Baylor Law family has to pro bono and public service, and they highlight the herculean efforts that our students, faculty, and staff have undertaken in service to their neighbors.

In 2020, Joshua G. Borderud, Director of Clinical and Pro Bono Programs at Baylor Law, was named the recipient of the American Inns of Court Sandra Day O’Connor Award for Professional Service given annually to an American Inn of Court member in practice for ten or fewer years for excellence in public interest or pro bono activities. The award was presented at the Supreme Court of the United States.

In 2019, Stephen Rispoli, Assistant Dean of Student Affairs and Pro Bono Programs at Baylor Law, was awarded the Pro Bono Coordinator of the Year Award by the State Bar of Texas, an honor presented to an individual who has made an exceptional contribution to the delivery of, and access to, legal services for the poor. Under Dean Rispoli’s leadership, the Waco-McLennan County Young Lawyers Association launched the Pro Bono Challenge in 2015. The Challenge provides all lawyers in McLennan County the ability to easily track hours online and keeps lawyers up to date with new and ongoing pro bono opportunities. Since the Challenge’s inception, it has met or exceeded its goal for reported pro bono hours each year.

In 2018, Tycha Kimbrough received the Law Student Pro Bono Award from the Texas Access to Justice Commission. The awards honors a student whose pro bono work has made a significant impact on the community and enhanced the delivery of quality legal services to Texas’ underserved communities. During her time at Baylor Law, Tycha was involved in an inspiring amount of clinical and service-oriented activities on a pro bono basis (in the Veterans Clinic, Trial Advocacy Clinic, and the Texas ATJ Pro Bono Spring Break Program, to name a few), for which she received no academic credit.

Also, in 2018, Professor Tom Featherston was honored with the Texas Bar Foundation’s Terry Lee Grantham Memorial Award. Established to celebrate Grantham's life as a gifted and committed lawyer, the award is given to lawyers who exemplify the qualities of an accomplished, talented, and dedicated practitioner, and who demonstrate a passion for service. Professor Featherston is active in the Texas Bar and the American Bar Association through their respective Real Estate, Probate & Trust Law Sections, is an Academic Fellow in the American College of Trust and Estate Counsel and supervises dozens of wills each year in the Wills and Estate Planning Clinic.

In 2016, Baylor Law received the Law School Commitment to Service Award from the Texas Access to Justice Commission. The award honors the law school that has most distinguished itself by actively educating its students about access to justice issues. Baylor Law previously received the award in 2010.

In 2015, Baylor Law was selected to receive the 2015 American Bar Association (ABA) Pro bono Publico Award, making it only the third law school in the nation to be honored with the award since 1984. Each year, the ABA Standing Committee on Pro bono and Public Service presents five awards to individual lawyers and institutions in the legal profession that have demonstrated outstanding commitment to volunteer legal services for the poor and disadvantaged.

In 2014, the ABA Public Interest Award was awarded to Baylor University School of Law’s Baylor Public Interest Legal Society (BPILS) for its remarkable implementation of their annual Adoption Day program. Also, in 2014, Baylor Law received the W. Frank Newton Award from the State Bar of Texas. The W. Frank Newton Award recognizes the pro bono contribution of attorney groups, including law school faculty, whose members have made an outstanding contribution in the provision of, or access to, legal services to the poor. According to the state bar and the committee, Baylor Law was honored for its “truly exceptional” commitment to the “provision of legal services to the poor.” The award is named for W. Frank Newton, former dean of Texas Tech University School of Law and longtime pro bono advocate.

In 2012, Baylor Law student Brittany V. Wray won the Law Student Pro bono Award from the Texas Access to Justice Commission. The award recognizes a law student whose pro bono work has made a significant impact on the community and reflects a passion for advocating on behalf of underserved populations.