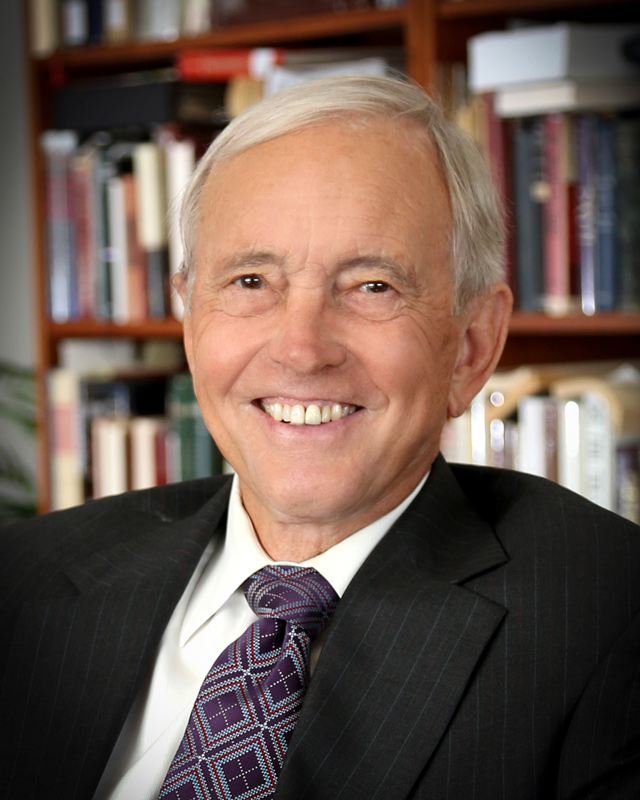 David was born on February 24, 1939, in Cleburne, Texas to Ernest and Dorothy Guinn. He grew up attending Main Street Methodist Church and Cleburne public schools until his graduation in 1957, where in high school he was Senior Class President. He earned a football scholarship to attend Baylor University that fall. His hopes of entering the medical profession ended that August with a severe knee injury that forced him to drop a biology class because he could not stand up for the three-hour lab. Upon the wise counsel of his advisor, Dr. Robert Miller, he enrolled in a political science course. That class sparked in David a new interest in becoming a lawyer.

No longer on an athletic scholarship, David was awarded an academic scholarship provided by Dr. W.P. Ball of Cleburne. After completing 90 hours of coursework, David utilized Baylor’s then available “3-3” program, enrolling in law school in 1961 for both his senior year of undergraduate coursework and his first year of law school. He graduated from Baylor Law School with his Juris Doctor degree in 1963.

David first worked for the Jack Altaras firm in Cleburne, then the U.S. Securities and Exchange Commission in Fort Worth. He then worked for two years at the firm of Harris & Ball in Arlington. In the fall of 1965, he was admitted to the University of Michigan Law School, where he obtained his LL.M. in International Law in May of 1966. That same month he began teaching at Baylor Law School, where he would continue for 54 years until his retirement in 2020.

During his career at Baylor, David initially taught many courses, including Criminal Law, Admiralty, International Law, Administrative Law, and Local Government, earning tenure in 1972. However, it was in the disciplines of Constitutional Law and Civil Rights that he made his mark and greatest contributions as a teacher. Respected and loved by the more than seven thousand Baylor Law students he taught, the University many years ago bestowed upon him the prestigious title of “Master Teacher.” His students and alumni lovingly referred to him as “King David” or "the Godfather." In 2013, he was named Baylor Lawyer of The Year, the highest honor given by the Baylor Law Alumni Association.

In a tribute to the esteem with which he regarded education, during his years teaching, he took pride in completing six hours of coursework that he was lacking to obtain his undergraduate degree by studying at Queens College in Oxford, England for three hours of credit and at McLennan Community College for a three-hour computer course, finally earning his Bachelor of Arts degree in 1997.

In addition to his teaching duties, David undertook additional work, teaching part of the Finkelstein Bar Review, acting as a special counsel for the Texas State Board of Examiners of Psychologists under Attorney General Jim Mattox, and counsel for the Western Institute of Science & Technology, a Dept. of Agriculture Program that assisted the Bahamas with programs to teach beef cattle husbandry. He also assisted in drafting the Texas Administrative Procedures Act. In October of 1978, he and fellow professor Michael Morrison began their practice as Guinn & Morrison, specializing in voting rights work, representing over 300 political subdivisions throughout Texas in redistricting matters.

David was admitted to the State Bar of Texas and the United States Supreme Court, was a Fellow of the American Bar Association, and was a member of the U.S. Supreme Court Historical Society and the Federalist Society.

He was preceded in death by his parents, Ernest and Dorothy Guinn.

In 1983 he married Cyndi Patton of Gustine, Texas and had one daughter, Catherine. He maintained a uniquely close relationship with her even until his death. He was married to Carol Hooker in 1962 in Fort Worth, Texas and had two sons, David Jr., and John.

He is survived by his former spouses; younger brother, John Bedford Guinn of Pidcoke; son David and wife Wendy of Idalou; son John of Waco; and daughter Catherine Dudley and husband Lane of Gustine. He also is survived by his three grandsons, Randal and wife Stephanie of Houston, Taylor and wife Callie of Longview, and Robert of Longmont, Colorado. He also was blessed with three great-grandsons, Graham, Grayson and Holden of Longview, Texas.

Memorials may be made to the Texas Pythian Home of Weatherford (pythianhome.org/donations) or Compassion International (compassioninternational@compassion.com).