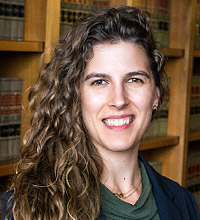 Rachel Kincaid joined the faculty in 2021.  She teaches criminal law and criminal procedure, and her scholarship focuses on criminal law reform and civil rights.

From 2016-2020, Kincaid served as prosecutor at the U.S. Department of Justice.  She began her prosecutorial career in the Civil Rights Division, Criminal Section, prosecuting hate crimes and official misconduct cases, including cases involving excessive force or sexual abuse by government employees.  She was also a member of the prosecution team in United States v. James Alex Fields, regarding Fields’s actions at the Unite the Right Rally in Charlottesville, Virginia, where he rammed his car into a crowd of counter-protestors.  From the Civil Rights Division, Kincaid transferred to the U.S. Attorney’s Office in the Southern District of West Virginia, where she continued her work as a civil rights prosecutor.  In 2020, Kincaid left the Justice Department to join a legal nonprofit called Mountain State Justice in Charleston, West Virginia.  At Mountain State Justice, she focused on civil rights litigation on behalf of currently and formerly incarcerated people in West Virginia, criminal law reform initiatives, and consumer protection cases on behalf of low-income West Virginians.

Kincaid received her law degree at the University of Virginia School of Law, where she was an articles editor for the Virginia Law Review and a member of the Order of the Coif.  Before law school, she received a B.M. in trumpet performance from the Eastman School of Music.  Then, as a British Marshall Scholar, she earned a Master of Music in trumpet performance from the Royal Northern College of Music in Manchester, England, and a Master of Arts in ethnomusicology from Cardiff University in Wales.  After law school, she clerked for Judge Raymond Kethledge of the U.S. Court of Appeals for the Sixth Circuit.

Quote: I went to law school to learn how to defend the rights of vulnerable populations from abuses of power.  So as I transitioned from practice to legal academia, I was drawn to Baylor Law’s emphasis on viewing the law as a profession of service.  As a professor at Baylor, I am excited to teach my students about criminal law’s history, current status, and its future, thereby preparing them to engage with criminal law, whether through practice, policy, or just as informed citizens.