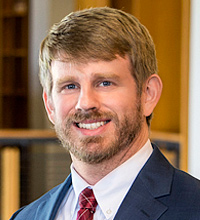 Professor Chris Jaeger joined the Baylor Law faculty in Summer 2021, following two years of service as an Acting Assistant Professor of Lawyering at NYU School of Law.  He teaches Contracts I and II.

The son of a psychology professor, Professor Jaeger dreamed of teaching from an early age—at least since it became clear that professional soccer was not in his future.  He earned his B.A. with honors in psychology from the University of Missouri.  He then graduated Order of the Coif from Vanderbilt Law School, where he participated in the Vanderbilt Legal Academy Scholars Program, served as an Articles Editor for the Vanderbilt Law Review, and published two student notes on topics bridging law and psychology.

Following law school, Professor Jaeger clerked on the United States Court of Appeals for the Eighth Circuit for Judge Duane Benton. He then returned to Nashville, where he enjoyed a varied law practice at Stites & Harbison, PLLC, until his academic interests drew him back to Vanderbilt for his Ph.D in psychology.

Professor Jaeger’s interdisciplinary research examines ways in which legal rules, standards, and processes reflect intuitive beliefs (and misbeliefs) about the human mind.  He is currently studying law’s frequently-used “reasonableness” standard, using experimental techniques from psychology to empirically investigate how we decide what is "reasonable."