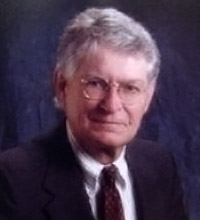 According to colleague and friend, Professor Gerald Powell, “Louis Muldrow would recite Robert Frost’s verse about the road less traveled by and make you wish you were so bold a wayfarer in life. He knew, with a sigh, it would make all the difference in you.”

From 1983 until 2000, Louis S. Muldrow directed the Practice Court Program. Holding the position as the Leon Jaworski Professor of Practice and Procedure, he was honored as Baylor Lawyer of the Year in 2000. Prior to joining the Baylor Law faculty, Muldrow was a highly successful trial lawyer and practiced for many years with the law firm of Naman, Howell, Smith, Lee & Muldrow.

His philosophy was in order for students to fully grasp the elements of a jury trial, each step in the trial process should be treated separately. Appellate writing was moved elsewhere in the law curriculum, allowing him to expand on Dawson’s mini-trials. He eliminated the competition approach to allow for more advocacy exercises in the course that consisted of one opening statement exercise and a witness examination exercise prior to the first mini-trial. The goal was to familiarize students with speaking to a jury and questioning witnesses. Before “Big Trial,” Muldrow implemented voir dire to teach students the strategy and importance of selecting a jury.

Insisting that students couldn’t try a case without understanding evidence, and they couldn’t understand evidence without trying a case, Muldrow teamed up with Evidence professor Gerald Powell to combine his second-year course in the third year. Students could be described as apoplectic over the change, as both classes had been rumored to be unmanageable on their own. However, Practice Court has been successfully operating under this model since the early ’90s, with the addition of Professional Responsibility as well.

“Under Professor Muldrow’s remarkable leadership, the Practice Court Program succeeded in teaching students the value of preparation and hard work, how to be precise in analysis, persuasive in speech, poised under pressure, and effective in advocating in the courtroom,” said Baylor Law Dean Brad Toben. “Muldrow believed that every experienced trial lawyer is ready and eager to admit that few professional pursuits require as much mental agility, pointed analysis, and presence of mind as the trial of a vigorously contested case,” Toben added. “Likewise, few professional pursuits subject the participant to as much emotional, mental, and even physical tension and stress as trial work. The students complete the course battle-weary, but with a feeling of confidence that combat can supply.”