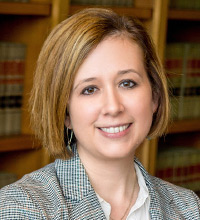 Kayla joined the faculty in January 2020 as a Legal Writing Lecturer with a focus on transactional drafting. She had previously served the Law School as an adjunct professor since the spring of 2018.

Kayla joined the faculty with over ten years of experience practicing law. She held the position of City Attorney for the City of Temple, Texas from November 2014 through August 2019. Before her appointment as City Attorney, she served as a Deputy City Attorney in Temple and began that position in May 2012. Prior to joining the City of Temple, Kayla worked for two established law firms in the Houston area where she gained valuable litigation and trial experience. While in Houston, she had the honor of working with other Baylor Law alumni, including Wayne Fisher and Larry Boyd who were both instrumental in her development as an attorney.

At the City of Temple, her practice focused on real estate transactions, economic development, contract drafting, and commercial litigation. As City Attorney she provided legal advice and support to the City Council, the City Manager, all City Departments, as well as the City’s appointed Boards and Commissions. She handled a variety of legal matters and gained invaluable experience in the field of municipal law. A majority of her practice was transactional in nature. She has experience drafting a variety of agreements to which the City was a party, including, but not limited to, economic development agreements, professional services agreements, and construction contracts. The City Attorney’s office also handled all right-of-way and easement acquisitions for the City and Kayla drafted various real estate documents including deeds, easement agreements, and land purchase agreements. In addition, Kayla has a vast amount of experience drafting ordinances and code provisions. During her tenure, the City Attorney’s office engaged in a comprehensive review and update of the City’s Code of Ordinances. Kayla’s experience at the City of Temple provided a good foundation for her role as Legal Writing Lecturer with a focus on contract drafting and transactional instruction.

Kayla has been active in various professional and community organizations over the last several years. She is a member of the International Municipal Lawyers Association and the Texas City Attorneys Association. She also participated in the State Bar’s Leadership SBOT program from 2017-2018. She has served as a board member for the Temple Children’s Museum and currently serves on the Board of Directors for United Way of Central Texas.

Kayla is married to her high school sweetheart, Chris. They have two daughters, Evie and Eliana, who drive their parents crazy most days. Kayla enjoys running, traveling, and spending time with family.