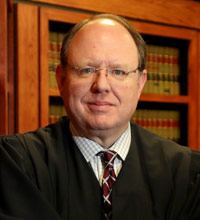 Judge Gary Coley has served as Judge of the 74th District Court since being elected in November, 1998.

Since being elected, Judge Coley has served through the Supreme Court of Texas Permanent Judicial Commission for Children, Youth & Families in various roles.  Included among those are as a planner and faculty member for the Trial Skills Program, member of the Legal Representation Committee, and member of the curriculum committee for the Child Welfare Conference.  In 2016, he was appointed to serve as a Commissioner to the Texas Supreme Court Children’s Commission.

Among other civic and professional activities, he is a member of the American Board of Trial Advocates (ABOTA), the Judge Abner McCall Inn of Court, and Rotary Club.

Prior to being elected, Judge Coley was a partner at Frederick & Coley and served as a prosecutor in the McLennan County District Attorney’s Office.  Judge Coley obtained his B.B.A. from Texas A&M University and J.D. from Baylor University School of Law.

Judge Coley and his wife Renee have three children and are active members of the First Baptist Church of Woodway.