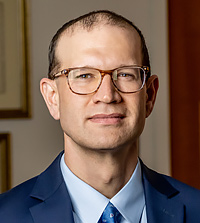 Director of Clinical and Pro Bono Programs and Clinical Lecturer

Joshua G. Borderud serves as the director of the Veterans Clinic, the Estate Planning Clinic, and the Trial Advocacy Clinic. Additionally, he manages the Pro Bono and Public Service Program. For his work, he received the Sandra Day O’Connor Award for Professional Service from the American Inns of Court at the Supreme Court of the United States.

Following graduation, he worked as an assistant district attorney in Milam County, Texas, prosecuting criminal cases and serving as legal adviser to the county judge. He then joined the Waco law firm of Pakis, Giotes, Page & Burleson, P.C. and represented clients in civil litigation. While in private practice, he was named the Outstanding Young Lawyer of McLennan County.

Borderud is active in the community and in the profession. Since 2020, he has served on the Waco City Council. He serves on the board of trustees of the Heart of Texas Behavioral Health Network, the local mental health authority for a six-county region. Borderud is a Fellow of the Texas Bar Foundation, a Master of the Bench in the Judge Abner V. McCall American Inn of Court, and serves on the board of directors of the Waco-McLennan County Bar Association.

He is married to Jennifer Borderud, the director of the Armstrong Browning Library at Baylor University. They reside in Waco with their two children and they are active members of Calvary Baptist Church.