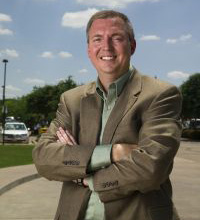 Professor Jim Underwood teaches Torts, Business Torts, Complex Litigation, and Appellate Advocacy & Procedure. He has been at Baylor Law since 2006. Prior to coming to Baylor, he was a member of the faculty at Stetson University College of Law in St. Petersburg, Fla., where he taught Civil Procedure, Complex Litigation, Pretrial Practice and Trial Advocacy. Underwood has received awards at both Stetson and Baylor for teaching, including Baylor University's Outstanding Faculty Award for Teaching among all academic disciplines.

"A good teacher is one who is genuinely interested and excited about the material, knows why the material will be important to the students, and takes joy in watching students master the subject," he said on what qualities make an exceptional teacher.

"Professor Underwood is a natural educator," he said. "He delights in helping his students find the light in the morass of difficult legal problems they encounter in their legal studies. He brings unbridled energy to the classroom, simultaneously challenging, stimulating and encouraging the students. His methods bring life to the material and enable the students to learn how to learn for themselves."

Underwood received his undergraduate degree from Oklahoma Baptist University in 1984 where he was a Kerr Scholar in Public Affairs. He graduated first in his class from Ohio State University's College of Law in 1987, where he served as the executive editor of the Ohio State Law Journal and was the author of an award winning case comment. He served as an extern to the Honorable Alan E. Norris of the Sixth Circuit Court of Appeals. Following graduation he was a law clerk for the late Honorable Jerry Buchmeyer, United States District Court for the Northern District of Texas.

Underwood entered academia after 14 years as a Texas trial lawyer. He spent 10 years (including five as a partner) with the firm of Thompson & Knight in its Dallas and Houston offices and then four years as a partner in the Dallas office of Akin, Gump, Strauss, Hauer & Feld. He handled a wide variety of cases during that time, including extensive representation of doctors in medical malpractice cases as well as the prosecution and defense of complex commercial litigation matters. Included among his successes were obtaining a federal court jury verdict in Midland, Texas, in 1990, of $175 million in a business fraud case (the largest jury verdict returned in the United States that year) and a 1998 jury verdict in Houston in excess of $28 million in a suit on an indemnity agreement. His last four years of practice consisted primarily of defending against nationwide consumer class actions. His pro bono efforts included providing legal representation to defendants in federal criminal prosecutions.