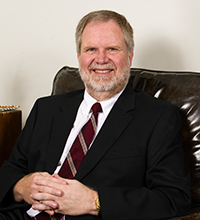 "You can only read so many essays citing Robert Frost and picking the path less traveled," says David Swenson, who has been scouring admissions applications at Baylor Law for almost thirty years.

When asked what makes a potential student stand out to him, he says it's more about the scores of students who don't stand out-who seem to write what a consultant told them to or write what you they think you want to hear. But sometimes, in the midst of stacks of essays, he comes across a story that's authentic. Detailed. Compelling. That shows rather than tells.

"It's easy to say you want to go into law to help others. It's another thing altogether to explain how you came to a point in your life where that seems like the path you must take, Frost and his Snowy Woods not withstanding," Swenson says.

Admissions keeps Swenson interested (and busy), but its teaching and getting to know the students in person that he loves. "The premise of Baylor Law faculty has always been if you're around, then you're available," Swenson says. "The idea of office hours is laughable. We're here, our doors are always open, and our students feel free to come in.

"Frankly," he says, "I wish the students were up here even more than they are. That's the fun part of the job-one on one discussions about a trademark question, which electives to take, what's it like to clerk."

When he's not reading admissions files or meeting with students, you'll find Swenson in the classroom teaching on the subjects of antitrust, copyright law, trademark law, sports law, and negotiable instruments.

Professor Swenson joined the faculty at Baylor Law in 1982 and is currently the George G. Kelly Professor of Law. He served as the Associate Dean of Baylor Law from 1984 to 1988 and has been Baylor's representative to the Law School Admissions Council since 1983. He also supervises law students in a legal services internship program and serves as Baylor's representative on the Board of Directors of the Lonestar Legal Aid Corporation. Professor Swenson is admitted to practice in the states of Colorado, Illinois and Texas. He is an active member of various committees of the Intellectual Property Law Section of the American Bar Association.

Professor Swenson is married to Zandra, a librarian, and they have two children in college at Baylor University.