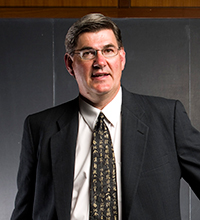 After graduating summa cum laude from Dana College in 1981 with a bachelor's degree in mathematics and a minor in coaching, Brian Serr wasn't sure he wanted to leave the basketball court for the courtroom. After being named to various small college all-star teams, there was an opportunity to play pro basketball in Denmark, but Copenhagen was a long way from his increasingly unrealistic NBA dream, both geographically and athletically. There was a more well-traveled route to a lifetime of basketball — a career as a high school math teacher and coach, perhaps the only career path discernable from his college course work. And there was law school, an option gently suggested to him by his parents, a Lutheran minister and a kindergarten teacher, who were both familiar with their son's penchant for arguing them into exhaustion.

Reluctantly setting his hoop dreams aside, Serr headed to law school. His law school classmates first knew him as “that tall guy who wears a sweatsuit to class,” and he was usually the first one in the gym every afternoon. Somehow, he found enough time to study that he graduated near the top of his class in 1984. But despite his law degree, or perhaps in part because of it, Serr was quickly on a path that would lead him back to teaching, coaching, and even quite a bit of basketball.

Professor Serr took a position as a legal writing instructor and LL.M. candidate at the University of Illinois, pausing first to pass the bar and squeeze in a basketball trip to England to play with a touring team of college players. The following summer, after completing the LL.M. program at Illinois, he went back to Europe with a college coach to put on several basketball clinics in Belgium. Upon returning to the states, he moved to Houston to clerk for the legendary John R. Brown, Chief Judge of the United States Court of Appeals for the Fifth Circuit throughout much of the civil rights era. Serr still considers his time with Judge Brown to be the most valuable learning experience in his legal career, and that job also opened a door at Baylor Law.

At Baylor, Professor Serr has come full circle back to his original interests — teaching, coaching, international travel, and a little basketball on the side. He teaches courses in criminal and constitutional law. He has been recognized for his commitment to teaching by Baylor University (Most Outstanding Faculty Member in Schools of Law, Business, Engineering & Computer Science, 2002) and by The Texas Lawyer (honored in 2003 as “The Most Influential Professor” on the most highly regarded law teaching faculty in Texas). Serr has also coached for 34 years in the law school's nationally known advocacy program. In national moot court competitions, his appellate advocacy teams have recorded six national championships, one national second-place finish, and five national third-place finishes. Recently, in 2019, Serr’s team won the prestigious ABA National Appellate Advocacy Competition in resounding fashion with the two advocates individually ranking as the top two advocates in the nation.  That performance helped propel Baylor Law School’s Moot Court Program to the overall #1 ranking in the country.

Teaching law has also contributed to Professor Serr's passion for international travel. He won a Fulbright Scholarship in 1994 to teach a course in American law at Vytautus Magnus University in Kaunas, Lithuania. He was awarded a fellowship in 2001 to attend an international conference on human rights in Salzburg, Austria. In 2007, he served as a delegate to a rule of law conference in St. Petersburg, Russia. And from 1996-2011, he was the director of the law school's international summer program in Guadalajara, Mexico, where he also taught courses in human rights. Currently he teaches in and administers the "School of Appeal" as part of the law school's Academy of the Advocate, a summer program in St Andrews, Scotland. In 2016, Serr traveled to Uganda to participate in a justice mission working in Ugandan prisons. This eye-opening experience served as the inspiration to initiate an international justice project for Baylor law students, eventually resulting in a partnership with UP Zambia, an NGO dedicated to serving unrepresented juveniles within Zambia’s overburdened juvenile justice system.  Up to a dozen Baylor law students now travel to Zambia each summer as part of this unique internship opportunity. Of course, Professor Serr doesn't need a professional reason to travel overseas. One of those obnoxious “country counters,” he has now visited nearly 60 countries.

Shortly after arriving at Baylor Law, Serr worked with several students to start a Sunday night basketball league, a law school institution that lasted nearly 20 years. He competed against “20-somethings” in that league for, well . . . way too long. As his basketball skills diminished, his need for competition was fulfilled by an active appellate practice. Professor Serr has briefed and orally argued cases in both the United States Supreme Court and the United States Court of Appeals for the Fifth Circuit.  He won a decade-long civil rights case involving police brutality, a case that established important precedents in the area of municipal liability for the improper hiring and/or inadequate training of police officers. Three times he has been asked to represent The Conference of Chief Justices (composed of the Chief Justices of all 50 states) in United States Supreme Court cases. His work on one of those cases, which ended with the Supreme Court upholding the constitutionality of the states' primary funding vehicle for providing legal services for the poor, earned Serr one of the American Bar Association's top pro bono awards. He has worked on constitutional issues for a diverse array of clients, including federal agents injured in the fateful raid on the Branch Davidian compound, a murder defendant in a federal capital prosecution, and the American Football Coaches' Association.

Professor Serr married his wife, Kathy, in 1993. Kathy has coached many of the law school's moot court and mock trial teams and presently serves as the law school's Advocacy Program Coordinator. Brian and Kathy have three beautiful daughters - Grace, Olivia, and Sophia – each adopted at about 10 months of age from orphanages in various parts of China. Professor Serr has spent years coaching his daughters' basketball and volleyball teams, and plans to spend many more years (God willing) on “one of the best backyard half-courts on the planet” instructing his daughters (and hopefully one day his grandchildren) on the mechanics of the jump shot and the art of the cross-over dribble.