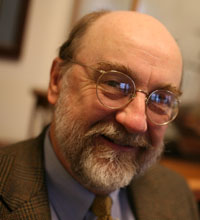 During his undergraduate days at Baylor University, Professor Gerald R. Powell was a top debater. He reigned as champion of the Southwest Conference and qualified for the national debate tournament. It is a skill that has served him well as both a trial lawyer and as a teacher in Baylor Law's renowned Practice Court Program. He is known for the tough love he exhibits to his students in Practice Court advocacy sessions. He said PC is a method that works.

"I guess the old adage is, 'the proof is in the pudding,' " he says. "When you look at our graduates and what they accomplish in the world, that's a reflection on our program, and that makes us very proud. The students come in very smart, and we take them and turn them into very capable lawyers, so that by the end, they are ready to step into a courtroom and represent a client or take the bench as a judge. It's personally rewarding to see that transformation."

Professor Powell, a native Wacoan, earned his JD from Baylor Law in 1977, and was ranked first in his class. During his time at Baylor Law, he was a member of the national mock trial team and national moot court team, and executive editor of the Baylor Law Review.

He joined the Dallas law firm of Vial, Hamilton, Koch & Knox in 1977, and had an active litigation practice with the firm. He made partner in 1982. In 1986, Professor Powell returned to Baylor Law to teach, and in 1987 he was appointed the Abner V. McCall Professor of Evidence Law. Professor Powell also has been named a Master Teacher by Baylor University, the highest honor granted to Baylor faculty members.

Professor Powell is an associate of the American Board of Trial Advocates, a professional association of experienced trial lawyers, and was appointed by the President of the State Bar of Texas to the Court Reorganization Task Force. He has served on the Administration of Rules of Evidence Committee for the State Bar of Texas. Additionally, he has taught judicial training courses for the Texas Center for the Judiciary.

When not teaching at Baylor Law, Professor Powell enjoys outdoor activities, traveling and reading. He is the former Scoutmaster of Troop 453, Boy Scouts of America. In that capacity, he has led Scouts on weeklong expeditions in backcountry New Mexico and hiked 40 miles through the Grand Canyon in Arizona.

He also enjoys pursuing his interests in history and historic ship modeling. His office boasts a fully detailed 1:90 scale model of the H.M.S. Victory, a British sailing ship made famous by Lord Admiral Horatio Nelson at the Battle of Trafalgar in 1805. The model took 11 years to build.

Professor Powell has often taught Baylor continuing education classes on historical subjects. He has served as a director on the Texas Ranger Hall of Fame & Museum Advisory Board, and he originated the Baylor-Waco Civil War Round Table in the late 1980's.

Professor Powell and his wife, Barbara, have two children: Colin, a Baylor Law graduate; and Calley, a Baylor University graduate.