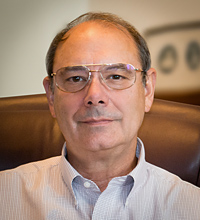 Mike Morrison thought he was destined for the life of a Marine and was attending the University of Oklahoma on a Navy scholarship. He found his plans changed after he blew out a knee while playing football.

After earning a degree in psychology with high honors from OU in 1971, he continued his education at the university. He received his law degree in 1974 and was named the Outstanding Law Student for the year by the Oklahoma Bar Association.

When Morrison joined the Baylor faculty in 1977, he was slightly older than the students he had been hired to teach.

"I had several students come up to me in those early years to thank me for being compassionate. That surprised me because I thought I was a tough professor," he said. "It's rare that I would ever walk out of a classroom without learning something from my students that I didn't know when I walked in, even after almost 40 years of teaching.

He began making his mark as an expert on redistricting and voting rights in 1978. Along with Professor David Guinn, Morrison has represented cities, counties, and school districts throughout Texas and Arkansas. In 1981, he represented the Texas Secretary of State's office during the statewide redistricting litigation, and in 1991 he served as a consultant to the Texas Legislative Council for the State of Texas redistricting process. He was hired by the Lt. Governor of Texas to serve as Legal Advisor to the Senate Jurisprudence Committee in preparing and conducting Congressional Redistricting during three special legislative sessions from July through October 2003, again in 2011 and by the Texas House Redistricting committee in 2013.

His expertise in local government has made Morrison an active member of the Waco community. He served on the Waco City Council from 1994-1996 and for two terms as Mayor of Waco from 1996-2000, during which he represented Waco nationally and internationally. In 2005, he was tapped by former Baylor interim president Bill Underwood to serve as chief of staff, a position he also held under Baylor President John M. Lilley.

In 2006, he was named the Jo Murphy Chair of International Education and director of the Center for International Education. As such, he was responsible for the global opportunities offered to students, faculty and staff and found himself traveling anywhere from 10 days to two weeks a month to countries throughout the world. In 2011, he returned to the Law School teaching full time.

Morrison is admitted to practice in Oklahoma, Kansas and Texas, as well as the United States Supreme Court and the federal courts of Texas and Oklahoma. He has been recognized by his peers with election as a fellow of both the Texas and the American Bar Foundations. Additionally, he was named a Baylor Outstanding Professor in 1997.

For many years, Morrison and his wife, Nancy, along with fellow Baylor Law Professor Mike Rogers, and his late wife, Diane, spent several weeks during summers sailing in the Caribbean or on the small island of Aruba. He and Nancy, who retired from the Waco firm of Naman, Howell, Smith and Lee, are both ordained Elders and members of the First Presbyterian Church of Waco.