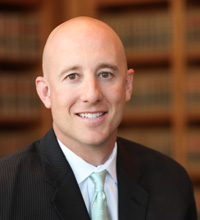 Professor Meier joined the Baylor faculty after stints at the University of Nebraska College of Law and the Drake University Law School. An innate educator, Meier has been voted professor-of-the-year three times in his young academic career.

"Teaching is something that I enjoy doing. The process of thinking through material and organizing it for clarity, and then presenting it to students, is something I find very fulfilling," says Meier. "I also have found that this process facilitates good research."

Professor Meier's primary research interests relate to the jurisdiction of federal courts, and he has published extensively in that area.

"We are excited to have such a promising young scholar on our faculty," said Baylor Law Dean Brad Toben. "Luke has demonstrated the ability in his research to tackle difficult issues and to analyze them from a different perspective. Good scholarship requires those traits, and Luke comes by them naturally."

Meier graduated with high honors from the University of Texas School of Law. During law school, he was named to the prestigious Chancellors honorary society and also served as Managing Editor of the Texas Law Review. He also worked as a research assistant to both Charles Alan Wright and William Powers, Jr. Following law school Meier clerked on the United States Court of Appeals for the Tenth Circuit for Judge Michael Murphy. After his judicial clerkship, Meier worked as a civil litigator for both Vinson & Elkins and also for the State of Texas as an Assistant Attorney General.

Luke and his wife Kelly have three children.