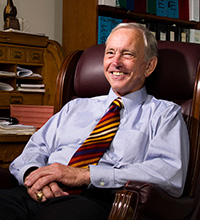 The Baylor Law family refers to Professor David Guinn as "the Godfather," and when you see him in his handsome office, his father's rolltop desk behind him, it is easy to picture a Texas version of Don Vito Corleone. And like the famous Sicilian, when Baylor Law's senior faculty member makes an offer, few refuse him. However, unlike the fictional character's proposals, Professor Guinn's offers are likely to be lunch with him at Baylor University's faculty dining room, a round of skeet shooting at the Waco Gun Club or perhaps a donut that he routinely brings to staff and students.

"Professor Guinn is an individual for which I have immense respect," said J.D. Ressetar, a member of the August 2009 graduating class. "Getting to know him has been a highlight of my Baylor Law experience because of his dedication to his students in and out of the classroom. In class, his remarkable knowledge of Constitutional Law challenges his students. Outside of class his open-door policy, friendly personality and dry wit leads to many long lasting relationships with his students. Whether Professor Guinn is helping you understand the course work or helping you find a job, his genuine interest in helping his students achieve success is extraordinary."

Professor Guinn attended Baylor University and majored in Political Science. He received his J.D. from Baylor Law in 1963. Ironically, he did not receive his bachelor's degree until 37 years later. When Guinn left Baylor, he was six hours short of completing the requirements for a bachelor's degree. Then, a bachelor's degree was not a mandatory requirement for entering Baylor law; a student could enroll with only three years or 90 hours of college course work. Guinn did just that. But he always regretted not completing that undergraduate degree. He spent one summer doing course work at Great Britain's famous Oxford University but was still three hours short. He decided to take a computer course at Waco's McLennan Community College to complete his degree requirements.

After Professor Guinn received his J.D., he was employed by the United States Securities and Exchange Commission for two years. He then attended the University of Michigan School of Law where he received his LL.M. in International Law in 1966 and returned to his alma mater to teach.

During his long tenure at Baylor Law, Professor Guinn has assisted in the drafting of the Texas Administrative Procedures Act and has served on numerous advisory bodies in the State Bar and on numerous committees at Baylor University. In addition to constitutional law, he teaches courses in the area of civil rights and local government.

Along with Professor Mike Morrison, Professor Guinn has been involved in the redistricting process at the state and local level. After the 2010 Census was released, the two redistricted over 40 cities, counties, and school districts throughout Texas.

Professor Guinn served as Faculty Representative to the Southwest and the Big XII athletic conferences from 1986-2001. He also served on the first Division I Management Council of the National Collegiate Athletic Association in 1997 and has continued to work with Baylor Athletics since that time.

Aside from his considerable work teaching and redistricting (his "professional hobby"), Professor Guinn immensely enjoys traveling, reading, and exercising. Since the late professor Loy Simpkins first encouraged him to begin running 40 years ago, Professor Guinn estimates he has run 25,000 miles, and to this day averages 15 miles a week.

Each year Professor Guinn travels to South Texas and Mexico with friends, colleagues, and former students to hunt pheasant and white-wing doves. One look around his office reveals another of his passions - the study of history. From the mounted arrowheads on the wall, passed down from his father, who was a history teacher, coach and Superintendent in Cleburne, Texas, to the models and memorabilia scattered amongst books and photographs, Professor Guinn's appreciation of history is evident from the outset.

"Young people don't read anymore," he lamented while thumbing through a book by George S. Patton. "They don't know what their grandfathers did."

Professor Guinn has two sons, David, Jr., and John, who graduated from Baylor Law and a daughter, Catherine, who is a graduate of Baylor University.

"I tell all my young people that the most important thing to securing a job is to find something that you really enjoy doing. You will never be good at it if you don't enjoy it. No one on this Earth ever had a job they loved more than I love mine," he said.