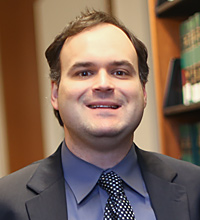 Chris Galeczka is fond of saying "I may have used some of my 15 minutes of fame rather early." He started doing so in 1995, when upon taking First Place in that year's National Geography Bee, his achievement was announced in the Detroit News under the headline "Local Teen Has All the Answers." While he does not make such a claim himself, he is happy to provide in-depth research assistance to students and faculty as Baylor Law Reference Librarian. Additionally, Chris also assists with instruction in the Legal Analysis, Research and Communication (LARC) courses.

Chris received his BA in International Relations and JD, magna cum laude, from Michigan State University in 2003 and 2006, respectively. While an undergraduate, he served as President of the Michigan State University's Academic Competitions Club, leading the club in intercollegiate College Bowl competitions, which he describes as "Jeopardy with teams and without the board." During this time he (or his voice, to be specific) appeared again on national TV as a Phone-a-Friend on Who Wants to be Millionaire? In law school, he served on the staff of the MSU Journal of International Law and completed internships with a state senator and trial court judge. After practicing immigration law in the Detroit area, he transitioned for a time into education, earning a teaching certificate at Wayne State University and serving as a social studies and Spanish teacher.

Chris earned his Master of Science in Information from the University of Michigan in May of 2013. There, he was awarded the Beth A. McWilliams Scholarship for aspiring law librarians and gained experience as a reference and research assistant at Michigan's William W. Cook Legal Research Library.

Chris continues to enjoy various trivia competitions, attending sporting events, as well as travelling and picking up new foreign languages: "I grew up speaking Polish, took Russian as an undergraduate, later earned a Spanish minor, and am currently working on my Texan." He is a member of the State Bar of Michigan and the American Association of Law Librarians.