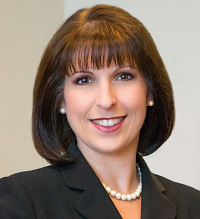 Professor Bridget Fuselier knew at the young age of 10 that she wanted to be a lawyer, a decision she credits to her parents, grandmother and a love of reading.

"Growing up both of my parents worked, and I spent a lot of time with my grandmother," she said. "She was always very interested in politics and history and is the person I credit for sparking those interests in me."

"When I was 10 years old, in the fourth grade, I got interested in books that focused on politics and history. I remember there was a series of books -- The Life of John F. Kennedy, The Presidency and The Constitution. I read all three and checked them out over and over again. One day, when I was on the last of the three books, The Constitution, my grandmother asked me what I was reading. I told her that it was a book on the Constitution. I explained to her that I was reading about all of these rights that U.S. citizens are supposed to have and was wondering how exactly we could make sure that we actually got these rights that were promised. She simply said, "Well, that's what lawyers do honey.' That one statement had a greater impact on my life than she could ever know. Right there at the age of 10 my response was, 'Then that is what I am going to be!'"

After receiving her J.D., Professor Fuselier moved to Beaumont and joined the firm of Mehaffy Weber, PC, as an associate in 1998 and was elected as a shareholder in 2004. Her litigation experience includes the successful representation of defendants in medical malpractice, premises liability, and employment discrimination cases. Professor Fuselier has authored and published articles for the Baylor Law Review, Texas Lawyer, and Houston Lawyer on topics involving medical malpractice litigation. In 2006, she was selected as the Jefferson County Outstanding Young Lawyer. She was also selected as a Rising Star by Texas Monthly in 2005 and 2006 in the area of civil litigation.

While in practice, Professor Fuselier actively participated in professional, community and charitable organizations. She said that she was fortunate to be a part of a local bar association that stressed service.