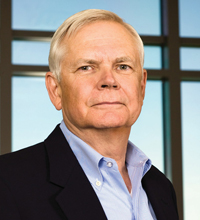 The Mills Cox Chair of Law

Baylor Law Dean Brad Toben says, "A person cannot work with trust and estate or marital property law in Texas without seeing his handiwork." He is Tom Featherston, the Mills Cox Professor of Law and 2009 recipient of the Distinguished Probate Lawyer Lifetime Achievement Award, which is given by the Real Estate, Probate & Trust Law Section of the State Bar of Texas.  In 2018, the Texas Bar Foundation presented him with the Terry Lee Grantham Memorial Award for his contributions to the legal profession.

He co-chaired the State Bar's cooperative efforts with the Texas Legislature's Legislative Council in re-codifying the Texas Probate Code, the first and most comprehensive change in the statutory law affecting decedents' estates in more than 50 years. Featherston also provided oversight for two bar committees charged with drafting new substantive law legislation in the area of probate court venue and jurisdiction and independent administration and served as the academic resource for the Texas Legislative Council as issues were raised during the non-substantive new probate code drafting process. The new Texas Estates Code went into effect in 2014.

Featherston also participates in committee work for the American Bar Association, where he served on the governing council of the Real Property, Trust and Estate Law Section. He also served as the Trusts and Estates editor of Probate & Property, the section's magazine, from 1999 through 2015.  He is currently serving as the section’s adviser to a drafting committee of the Uniform Law Commission.

Since 2009 he has served on the faculty of the annual Skills Training for Estate Planners program sponsored by the Real Property, Trust Estate Law Section of the American Bar Association. This week long program held in New York City through 2018 is designed to assist practicing lawyers from around the country transition into the estate planning practice. Professor Featherston typically lectures for two-three hours during the week on a variety of topics such as how the federal transfer tax system operates, what lawyers in common law states need to know about community property and professional responsibility issues. While participating in the 2011 program, Professor Featherston and his wife attended the Yankees game when Derek Jeter got his 3,000th hit.  The program moved to the University of South Carolina’s law school in 2019.

He is also active in the leadership of the Real Estate, Probate & Trust Law Section of the State Bar of Texas, having chaired numerous committees, served on its governing council and presided as the chair of the section in 1997-1998. For years, he also co-chaired the Southwestern Legal Foundations annual Wills and Probate Institute in Dallas.

Board Certified in Estate Planning and Probate Law by the Texas Board of Legal Specialization (1979-2019), Featherston was elected as an Academic Fellow of the American College of Trust and Estate Counsel in 1991 and as a Fellow of the American Bar Foundation in 1993. He was named Outstanding Baylor University Professor in 2000. He also has received the Journal Award of the Texas Bar Foundation and the Award for Outstanding Achievement in Continuing Legal Education from the State Bar College.

In addition to serving as the Trusts and Estates Articles Editor for Probate & Property, he co-authors West's Texas Practice Guide- Probate on an annual basis. Featherston also authored the first edition of Questions and Answers: Wills, Trusts & Estates, published by LexisNexis, co-authored the second edition, and authored its third edition in 2014.

Featherston earned his J.D. with highest honors from Baylor Law in 1972 after receiving his B.B.A. from Baylor University in 1971. After graduation, he entered private practice in Houston from 1972 through 1982. He joined Baylor Law in 1982 and was appointed the Mills Cox Chair in 1990.

He and his wife, Sherry, have two daughters and three grandchildren.