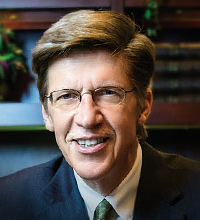 Brad Toben looks upon his position as dean of Baylor Law, indeed he looks upon the profession of law, as a way to help individuals, his community and our larger society.

“The law is a calling to serve. As lawyers, we meet people in their hour of greatest need. Their family relationships, their property, their business interests, and maybe even their civil liberties may be at stake. They're scared, worried, and feel adrift, and they come to their lawyer for guidance and solutions they can trust,” he said. “I hope all our law students adopt the mindset that they are not in this profession to advance self, for prestige or for hoped-for financial security - they are here to serve others. This truly is a vocation.”

Dean Toben graduated from Baylor Law with the J.D. degree, with honors, in 1977, after completing his B.A., with honors, in political science at the University of Missouri-St. Louis. He received the LL.M. from Harvard Law School in 1981 and then taught at Indiana University School of Law-Indianapolis.

He joined the Baylor Law faculty in 1983 and was named as Dean of the Law School in 1991 at the age of 36.  He is now the longest serving dean in the nation among the 203 ABA accredited law schools.  His academic interests have focused in the areas of commercial law and the relationship of debtors and creditors under state and federal law.

Dean Toben, the M.C. and Mattie Caston Professor of Law, is an elected member of the American Law Institute and has served by appointment of the Governor of Texas as a Commissioner to the National Conference of Commissioners on Uniform State Laws. He has been recognized as an Outstanding Young Alumnus of Baylor University. He also has been recognized as a Distinguished Alumnus of the University of Missouri-St. Louis and has received the University of Missouri-St. Louis Distinguished Alumni Political Science Award. Dean Toben was recently recognized by the Texas Trial Lawyers Association at a reception in his honor, for “exemplary service and commitment as a guiding light in legal scholarship and the pursuit of justice.”

Additionally, Dean Toben has participated regularly in accreditation and membership inspections of law schools for the American Bar Association and Association of American Law Schools, and has been active in the State Bar of Texas, especially in the bankruptcy specialization certification program. He is licensed in Texas and Missouri, practiced in St. Louis, Missouri, and was previously of counsel to the firm of Dawson & Sodd in Texas. He is a Master of the Bench in the Judge Abner V. McCall American Inns of Court and is a Fellow of the American Bar Foundation and the Texas Bar Foundation.

Dean Toben has been active in numerous civic and charitable activities and has served as an elder, trustee, deacon, and chair of the board of Central Christian Church (Disciples of Christ). For many years, he also has taught an adult Sunday School class at Central Christian. His wife, Beth, is a long time child sexual assault and abuse prosecutor. The Tobens have two children.