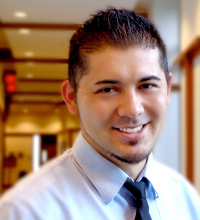 At Baylor Law, Nick oversees and coordinates the design and production of various internal and external marketing and promotional materials. From admissions related materials and development projects to digital graphics and the Docket Call – Baylor Law's alumni magazine – he works closely with multiple departments within the Law School Administration. Nick serves as the Law School's chief photographer and maintains and administers multiple Baylor Law websites. He also serves on both the Baylor Law Marketing and Web Committees.

After earning his Bachelor of Fine Arts degree from New Mexico State University in 2007, Nick formed a new relationship with his alma mater and joined NMSU's creative team in the University Communications and Marketing Services department as a graphic designer, illustrator, and web designer. During his seven years there, Nick not only designed printed materials for nearly every department and college on campus, but also administered and maintained numerous websites. He was also responsible for the creation of digital graphics and the design of multiple online advertising campaigns.

Nick's work as a graphic designer and production specialist at a commercial printing facility in Las Cruces, New Mexico, gave him the insight to understand the nuances of various printing methods. It was there that he also learned the mechanics of the commercial printing process.

Nick's work has been published on both local and national levels and has been recognized by the Council for the Advancement and Support of Education (CASE district IV), the Higher Ed Marketing Report, the New Mexico Press Women's Association, and the National Federation of Press Women. He has received multiple BaylorPLUS Salute nominations for Baylor employees who have gone "above and beyond" and was named a 2008 Amazing Aggie, an internal NMSU recognition award.

Nick was an active member of the University and College Designers Association.

He and his wife have two children.