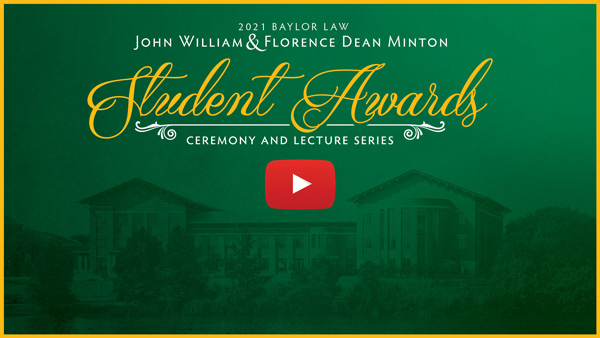 Due to Covid-19, the 2021 Student Awards Ceremony was held virtually.

For a pdf of the 2021 Student Awards program, click here.

The Student Awards Ceremony and Lecture Series is named in honor of John William Minton and Florence Dean Minton. Their daughter, the late Polly Minton McLeRoy of Sherman, Texas, established and endowed the lecture series in 1993 to honor her parents. In more recent years, Mrs. McLeRoy’s son, William McLeRoy, graciously endorsed the concept of a ceremony to recognize the achievements of Baylor Law students to honor the memory of his grandparents and their lives’ work, and at which the students would be addressed by a notable, inspiring speaker.

John William Minton was born in 1875 and graduated with an LL.B. from the University of Texas School of Law. In 1910, he was appointed to fill an unexpired term in the Texas Legislature from Sabine County; he subsequently was elected to the position and served in the Legislature through 1914. Thereafter, he had a successful practice in Hemphill until his death in 1959. He particularly was noted for his early advocacy in connection with East Texas timber interests. Florence Dean Minton was also born in Sabine County and was an active civic and church volunteer.

Mr. and Mrs. Minton had five children. Their daughter, Mrs. McLeRoy, who passed away in 2003, was a graduate of Texas Woman’s University. A retired schoolteacher, she was an active member of the Audubon Society and the Nature Conservancy. She had two sons, William and the late Richard McLeRoy. The focus of this ceremony on student achievement is one which honors the life aims of Mrs. McLeRoy as a teacher.