The 'Mad Dog' mock trial competition is held twice each year during the second quarter of Practice Court. 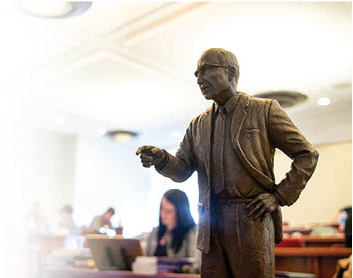 Baylor Law students compete, at first in teams and then as individuals, to determine which student has developed the most persuasive trial skills. This bi-annual competition builds on the tradition of mini-trial competitions that were held during the tenure of Professor Emeritus Matt "Mad Dog" Dawson.

Winners receive $4,000 and the coveted "Mad Dog," an 18-inch bronze statuette of the legendary Baylor law professor. Their name is also added to the 'Mad Dog' display on the second floor of the Law Center. 'Mad Dog' finalists receive $1,500.

The Honorable Bob and Karen Wortham generously sponsor Baylor Law's 'Mad Dog' Mock Trial Competition. Wortham, former judge of the 58th District Court in Jefferson County, served 12 years as U.S. attorney for the Eastern District of Texas before becoming a partner in the Reaud, Morgan and Quinn Law Firm. He began his career as a Jefferson County assistant district attorney and, at age 31, was appointed to serve an unexpired term as judge of 60th District Court, becoming the youngest district judge in the state. In 1993, he received the Department of Justice Award for Outstanding Service. Wortham has served as Jefferson County District Attorney since 2015.