A walk in the wetlands will yield a surprising number of encounters with a major group of predatory arthropods. The spiders are differentiated from insects by possessing two (not three) body segments and eight (not six) legs, spiders are among the more obvious yet elusive of the wetland species. Most easily seen are the 'orb weavers' which make the commonly-encountered spider webs among the vegetation and other structures. 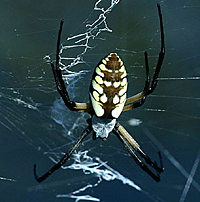 The most recognizable, and largest, of these is the golden garden spider (Argiope) with its zigzagging web pattern across the center of the web. Other orb weavers are usually easy to find as one looks for webbing or the usually exposed spider on the web.

Less obvious is the green lynx spider, a common but often overlooked spider due to very successful matching of the spider's body color with the surrounding vegetation. 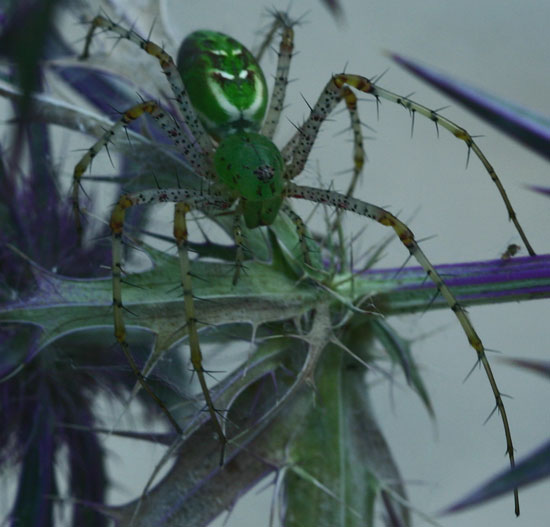 A female of this species will often be found sitting atop a large silken egg sac. If you look carefully among the flowers you might find well-camouflaged crab spiders prepared to grab prey, attracted to the flowers (flies, bees, beetles), with 'crab-like' front legs.

An occasional wolf spider, a solitary hunter that does not use a web to snare its prey, or a tarantula may be seen moving across exposed soil areas searching for prey or mates. The female wolf spider is often seen carrying a silken egg sac beneath her abdomen or her newly-hatched young on top of her body as she hunts. Tarantulas, among the largest 'hairy' spiders in the area, are usually docile hunters and not prone to be aggressive. If disturbed, however, the tarantula may dislodge the abdominal 'hairs' which are irritating to eye and nasal membranes ... or it may jump at you with front legs held high and fangs bared. Other spiders (usually 'dangerous' only if disturbed) that one might expect to encounter would include the black widow spider and the recluse spider. These spiders are usually active at night and remain hidden during the daytime hours. 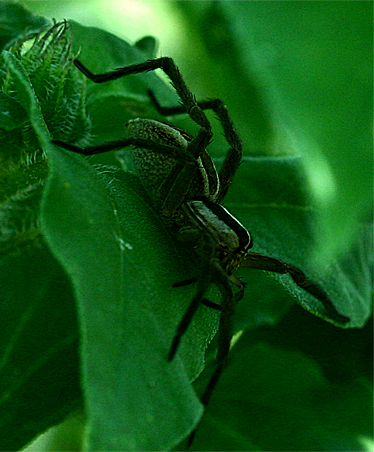 The jumping spiders may also be seen in the wetlands as they jump from plant to plant attaching a silk 'safety line' from its spinnerets in case it 'misses the mark'. Very colorful and strikingly patterned, these fuzzy spiders are easily identified by the two large headlight-like eyes on the front of a flattened face. Excellent eyesight allows them to see prey, mates and competitors,and to avoid predators. This makes them very difficult to 'sneak up on'.

These and other spider species serve as food for other wetland animals. They also do their part as biological control agents of small prey populations in the wetlands. And they afford the interested observer additional enjoyment during a visit to the wetlands.