Robust dragonflies and more fragile damselflies (Order Odonata) are among the most evident and varied of the wetland species complex. These fast-flying acrobats of the sky, with heads seemingly composed only of eyes and chewing mouthparts, usually display vivid (males) or more muted (female) colors as they chase prey and each other.

Frequently, a male dragonfly or damselfly will temporarily leave a stick jutting out of the water to chase a competing male from his territory before returning to the same perch. That same male may leave the perch to grab a meal on the wing - or grab a female behind her head with his abdominal claspers and fly with her for some time before she curls her abdomen up near his thorax for mating. 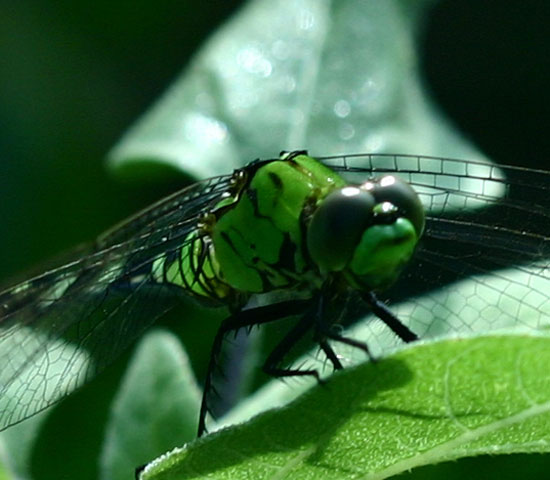 Once mating is completed, the female usually will be released and will deposit her eggs into the water or muddy areas.

These eggs will hatch into predatory, wingless nymphs (naiads), again appearing to be mainly eyes and mouthparts, which feed on aquatic prey before metamorphosing into winged adults. The dragonfly naiads use rectal gills for getting oxygen from the water, while the damselfly naiad uses caudal abdominal gills for the same purpose.

These species, as immatures or adults, provide very valuable food for fish, birds, herptiles and other arthropods in the wetland system.

The adult dragonflies are very difficult to approach or catch and are usually not viewed from as close up as are the damselflies. Binoculars are very useful assists in enjoying the antics of these wetland beauties.