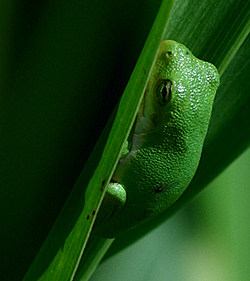 Many people distinguish frogs from toads by characteristics such as: frogs leap, toads hop; frogs are wet and smooth, toads are drier and "warty"; toads tend to be more terrestrial as adults, and so on. Taxonomically, however, frogs and toads both belong to the most diverse and abundant group of living amphibians, and occur all over the world in virtually every terrestrial and freshwater habitat. The other major groups of amphibians are tailed amphibians (like salamanders) and a little known group that is snake-like in appearance.

There are just under 4,000 known species of frogs worldwide, and they are an extremely diverse group of vertebrates in terms of life histories and habitat use; however, some generalizations can be made. Vocalization by males to attract females characterizes the breeding behavior of most frogs. In general, frogs (regardless of the degree that they are aquatic as adults) lay their eggs in water and have free-swimming herbivorous larvae called tadpoles. Frogs go through metamorphosis, which involves a complete reorganization of their body plan, from the larval to the primarily carnivorous adult phase. Because of their aquatic larval phase, frog life histories are often linked closely with timing and amount of rainfall. Some frogs breed only in ephemeral, temporary pools, while others are better adapted to more permanent bodies of water.

Interest in frogs has heightened in recent years among scientists and concerned citizens due to the phenomenon of "amphibian decline". Scientist have documented the decline or disappearance of amphibian populations at a variety of locations, and amphibian malformations or deformities have also caused alarm. There does not appear to be one single cause for all declines, and research into amphibian populations continues. Many liken amphibians to "canaries in the coal mine", warning us of environmental degradation.

Construction of the Lake Waco Wetland

The Lake Waco Wetlands habitat has attracted frogs as well as other wildlife. Six species of common frogs were documented through call surveys in 2003:

Green tree frogs are abundant and easily visible on cattail stems during warm weather, and leopard frogs are also easily spotted in the water. Bullfrogs have been heard and seen since 2003. There are undoubtedly other amphibians using the wetland or who may colonize it in the future. Call surveys indicate that the wetland is attracting frogs, but the success of the frogs, in terms of production of a new generation, is largely unknown. Southern leopard frog tadpoles have been collected, and other types of tadpoles have been observed. More or less permanent water, and the presence of fish, may limit the number of frog species that are able to successfully utilize the wetland. Some frogs don't breed where fish are present, and others are unable to successfully recruit a new generation in the presence of fish.

Both larval and adult frogs are important prey items to many other animals in addition to fish. Aquatic dragonfly larvae and other insects prey heavily on tadpoles, as do some birds, and it is a common sight (and sound - did you know frogs can scream?) at the Lake Waco Wetland to see green tree frogs eaten by ribbon snakes.