Named for the first President of the United States, Washington County is a land of beauty in southeast Texas whose history closely parallels that of the parent American republic. The Texas Collection of Baylor University contains numerous records, oral histories, books and periodicals, photographs, maps, manuscripts, and other rich materials of interest to both scholars and members of the general public who seek information about Washington County, Texas.

Located in the Texas Blackland Prairie, Washington County (Brenham, county seat) is 75 miles east of the state's capital city of Austin and 112 miles south of Waco and the campus of Baylor University. The county has gently rolling land, with elevations ranging between 200 and 500 feet above sea level-all nestled in an area with a subtropical climate. The hilliness of Washington-and especially the village of Independence-has prompted comparison between that community and the Greek city of Athens.

Natural boundaries of Washington County are Yegua Creek on the north, the Brazos River on the east, and various geographical features of Burleson, Fayette, Waller, Grimes, and Austin counties in southward and westward directions. The county has a significant post oak belt, with stands and groves of ancient live oak trees-but the land is also well timbered with pecans, elms, ashes, cottonwoods, red cedars, mulberries, hackberries, and hickories that are watered by forty inches of rainfall annually. 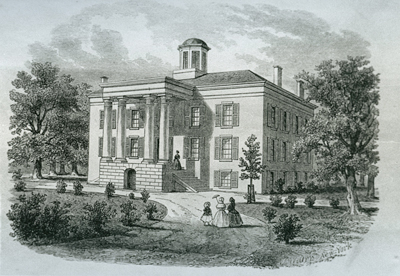 Archaeological evidence indicates human occupation of the land that now makes up Washington County for the last 9,000 years or more. Tribes in that area included the Tamique and Xaraname-prairie peoples living between the Tonkawas of Central Texas and the Karankawas of the coastal plains. European occupation of the region began around 1520, when Spanish explorers laid claim to this part of North America. The intrepid French explorer, LaSalle, also passed through the area that became Washington County in the late 17th century-alarming news to the leaders of the Spanish Empire. As a precaution against further intrusions by the French, the Spanish built a military supply line, known as La Bahia Road, across the land between Nacogdoches (East Texas) and Goliad (South Texas). La Bahia Road traversed Washington County along a route that would become part of Texas Farm Road 390 between the later town of Independence and its intersection with Texas Highway 105.

In the early 19th century, Spain and later, Mexico (which became independent after 1821) realized that an orderly settlement of the Lower Brazos Valley might depend on land policies which attracted legal immigration from the southern regions of the United States. Following his father's example, Stephen Foster Austin became a certified land agent and the first empresario to organize a colony of settlers to Texas during the 1820s. Some of the "Old Three Hundred" families who moved westward to the land between the Brazos and the Colorado rivers-including those of attorney John P. Coles and Dr. Asa Hoxie-received rich leagues of land south of Yegua Creek that they planted in cotton with labor forces bought or hired from other slave-owners. In time, the Coles Settlement (founded in 1824) became a successful frontier community known for its production in the cotton-corn plantation economy. Also highly significant in the county were the commercial river town and future national capital of Washington-on-the-Brazos (sometimes called Old Washington), the flourishing cultural settlement at Chappell Hill, and the major cotton gin town of Burton. During the post Civil War period Brenham, the county seat, superseded the riverine plantation towns as it became a railroad-enriched community and attracted numerous new residents. 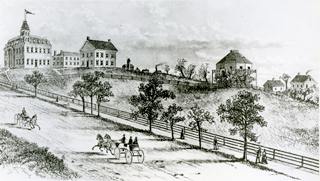 By the early-to-mid 1830s, citizens in and around Washington County were caught up in the Texan movement that would lead to revolution and separation from Mexico. The Texan Declaration of Independence was signed on March 2, 1836 in Old Washington. Former Tennessee governor Sam Houston assumed command of the army of patriots who, after a dramatic defeat in San Antonio at the Alamo and other disappointing events at Goliad and elsewhere, rallied around their commander at San Jacinto on April 21, 1836, to defeat the Mexican army and capture General Lopez Santa Anna-the president of the Republic of Mexico and head of its military forces. Emerging with this Texan victory was a new nation, and many of the key leaders of the new Republic of Texas either lived in Washington County or were frequent visitors there during this time. Evidence of the euphoria in the county came in the local decision to change the name of Coles Settlement to the relatively more colorful and hopeful name of Independence.

Now a republic, Texas continued the controversial practice of allowing slavery as an economic system. The communities scattered across the county experienced great prosperity and Washington County became a magnet for settlers seeking economic opportunity in Texas and better lives for themselves and their families. As prosperity continued, churches sprang up in the wilderness to serve and nourish a population intent on spiritual and educational programming as Baptists, Methodists, and Episcopalians moved into the county with educational goals as well as moral uprightness on their minds. Active religious organizations obtained charters for new academies, colleges, and universities from the Congress of the Republic of Texas. Local leaders John P. Coles, Robert Emmett Bledsoe Baylor, and others from the nearby town of Houston launched both same-sex and co-educational institutions in the towns of the county. In late 1845, Texas became the twenty-eighth state of the Union, but slavery remained legal in the new state and the plantation system remained largely intact.

The coming of the Civil War and its aftermath had serious effects on the new state and its residents. There was little doubt that Washington County citizens favored secession from the Union which they had joined only fifteen years before. Then governor of Texas, Independence resident Sam Houston was force to give up his elected position when he opposed the Secession Ordinance that whipped up enthusiasm for the Confederacy and caused young and old men in Independence and other Texas communities to don grey uniforms and march away with the Texas Brigade commanded by John Bell Hood.

The war took a high toll on the people of Washington County. So many of the male students and their professors at Baylor volunteered for the Confederate service that the university struggled to stay open during the four years of the war, and only the financial sacrifice of Baylor President William Carey Crane kept the university alive during that traumatic time. With the reading of Lincoln's Emancipation Proclamation on June 19, 1865, in Galveston, slavery officially ended in all of Texas, including Washington County, but much confusion existed about how planters might survive the loss of their labor forces. Union troops occupied nearby Brenham for a time, and post-war violence furthered deep-seated feelings already present before and during the war. The adoption of the Thirteenth Amendment to the U.S. Constitution brought an end to slavery in America, but in places such as Washington County, the breakup of the plantation system and the development of the crop-lien system with tenants and sharecroppers on the same land once tended by slaves failed to provide sufficient income for many in rural places. The colleges and universities of Washington County faced extinction or reduction in size: the "Athens of Texas" was no more.

Transportation innovations also significantly affected life in Washington County between 1840 and the 1880s. During the years of the Republic, the county had been served by river traffic on the Brazos as far north as Old Washington. Steamboats carried cotton to shipping points and Houston-Galveston commercial centers when the river depth was adequate. With the post-war era also came transportation by rail and Texas boomed economically in most geographical regions that adopted the new mode of transportation. By the middle of the 1880s, the state of Texas led the U.S. in railroad expansion, and 10,000 miles of track crisscrossed the state by the opening of the 20th century. Not all of Washington County benefitted from the railroad boom, however. Town leaders in Independence spurned the overtures of railroad planners, electing to remain linked to the coastal area by waterways, and when the rail line through the county ran through the town of Brenham, residence of Independence and leaders of Baylor University sensed that the halcyon days of Independence would soon be at end.

Not long thereafter, the trustees of Baylor made the fateful decision to join Waco University (another Baptist school) and they relocated their venerable university to Waco-112 miles northward. The trustees of the separate Baylor Female College decided to move to Belton the same year (1886). Transportation facilities in other parts of Texas were superior to those of Washington County, and communities such as Independence soon felt the adverse effects of market shifts and the closings of educational institutions.

Despite the changes and challenges, Washington County was able to adapt economically, thanks in part to its natural beauty and rich historical and cultural heritage. The crop lien system for growing cotton was eventually abandoned in failure, but land reconsolidation enables investors and traditional landed families to seek new and diverse avenues of income including mineral exploration, horse breeding, large-scale farming, cattle ranching, ice cream manufacturing, and tourist attractions such as Bed and Breakfasts. Springtime wildflowers offered beautiful sojourns for travelers passing through Washington County or seeking antique furniture during festivals. By the post-World War II period, hope for a brighter economic picture came to heretofore sleepy hamlets as Houstonians acquired land in the region and historic preservationists elected to restore sites and buildings across Washington County.

In recent years, the county has rediscovered its history, celebrating the rich heritage of such sites as the Independence Baptist Church (established 1839) and the scenic Seward Plantation (1855). Meanwhile, the state of Texas has aggressively publicized the Washington-on-the-Brazos State Park and its partner, the Star of Republic Museum (under Blinn College). Successful planning by the Greater Washington County Chamber of Commerce has led to an optimistic future for the entire county. In the new millennium, Baylor University's renewed interest in its roots in Independence has further raised expectations by local residents and the Independence Historical Society that their community might become a cultural laboratory for scholars.