The Inauguration of
Linda A. Livingstone, Ph.D.
The 15th President of Baylor University 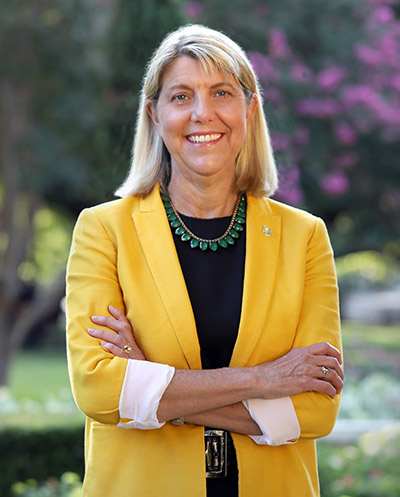 Since 1902, Baylor University has introduced its new presidents in public ceremonies through which the Baylor Board of Regents officially installs the institution’s leader. The University will welcome the Baylor Family and distinguished guests from across the nation to the installation of Linda A. Livingstone, Ph.D., as Baylor University’s 15th President on October 26, 2017.

Dr. Livingstone was announced as President of Baylor University on April 18, 2017. Her distinguished academic career began at Baylor where from 1991 to 2002 she was a tenured faculty member in the Department of Management before serving four years as associate dean of graduate programs for Baylor’s Hankamer School of Business. She led The George Washington University School of Business from 2014 to 2017 and Pepperdine University’s Graziadio School of Business and Management from 2002 to 2014. She is a strong voice for the role of Christian higher education and has established herself as a scholar in organizational behavior and leadership and an expert in the area of university accreditation.

She is a native of Perkins, Oklahoma, and played varsity basketball at Oklahoma State University, where she earned a Bachelor of Science in economics and management, a Master of Business Administration, and a Doctor of Philosophy in management and organizational behavior. Her husband, Brad, a teacher, also played basketball at Oklahoma State. They have one daughter, Shelby, who is a senior student-athlete on Rice University’s volleyball team.