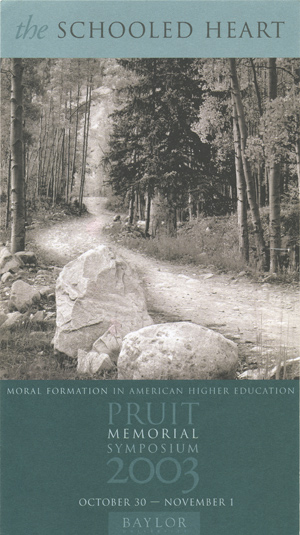 American higher education, by some measures, has never been in better shape. More students are devoting more time and resources to gain more education than ever before. Yet more does not mean better. Measured by other criteria, American higher education faces significant challenges, not the least of which is a loss of the moral direction once part and parcel of the educative process. Scholars across the political spectrum disagree about the causes and possible remedies for this loss. However, they by and large agree that the failure of higher education to provide any kind of coherent moral vision for life constitutes a critical problem for contemporary culture.

The proliferation of applied ethics courses, initiatives for teaching ethics across the curriculum, and service learning programs, as well as the revival of “great texts” curricula have all been identified as responses to the crisis of moral vision within the academy. Are these responses adequate? To what resources might the academy turn for developing serious moral education, and for what aims? What constraints, if any, should exist on moral education within the context of American higher education? What strengths or weaknesses does religious affiliation bring to colleges and universities on behalf of vital moral education? How does an academic institution's religious identity shape its purposes and programs related to character development? In what way ought this task to be taken up within the academic disciplines?

Baylor University invites you to join us for our annual Pruit Memorial Symposium, The Schooled Heart: Moral Formation in American Higher Education, as we explore these and related questions about the nature of and need for moral formation within the context of American higher education.

Stanley Hauerwas is Gilbert T. Rowe Professor of Theological Ethics at Duke University and the author of numerous books, including Resident Aliens, A Community of Character, The Peaceable Kingdom, A Better Hope, and With the Grain of the Universe, his 2000-2001 Gifford Lectures. Described by Time magazine as “America's Best Theologian” and “contemporary theology's foremost intellectual provocateur,” Hauerwas is a keen cultural critic whose considerable opus has significantly shaped conversation about postliberalism, narrative theology, and virtue ethics.

David Lyle Jeffrey is Provost and Distinguished Professor of Literature and Humanities at Baylor University. An expert in medieval English literature, Jeffrey is also a gifted speaker and prolific writer whose most recent book, Houses of the Interpreter: Reading Scripture, Reading Culture, joins his Dictionary of Biblical Tradition in English Literature, People of the Book, English Spirituality in the Age of Wyclif, and Rethinking the Future of the University, an examination of the relationships and contributions of historic Christian thought to the intellectual life of university disciplines.

Warren Nord has been the Director of the Program in the Humanities and Human Values and has taught philosophy at the University of North Carolina at Chapel Hill for 24 years. He is the author of many articles and book chapters, primarily on religion and education as well as two books: Religion and American Education: Rethinking a National Dilemma, and with Charles C. Haynes, Taking Religion Seriously across the Curriculum.

Joseph O’Hare recently retired as the longest serving president of Fordham University, where he was credited with fostering extraordinary growth during his 19 years of service. Prior to his appointment at Fordham, he was the editor-in-chief of America magazine, where he now has returned as associate editor. A former chairman of both the Association of Catholic Colleges and Universities and the Association of Jesuit Colleges and Universities, Fr. O’Hare has devoted considerable effort to the cause of Catholic higher education.

Julie Reuben is Professor of Education in the Harvard Graduate School of Education. She is a widely acclaimed scholar whose study of higher education and American society and culture has resulted in two books, the forthcoming Campus Revolts: Politics and the American University in the 1960s and Making of the Modern University: Intellectual Transformation and the Marginalization of Morality. The latter work earned the Choice Outstanding Academic Book Award in 1997.

David Solomon is an undergraduate alumnus of Baylor University and is now an Associate Professor of Philosophy and the W.P and H.B. White Director of the Notre Dame Center for Ethics and Culture. He is also the founder of Notre Dame’s Arts and Letters honors program. Solomon is a specialist in normative—especially virtue—ethics, and he has lectured widely and made frequent television appearances to discuss ethical issues. He is the coauthor of the first study of the public policy implications of the Roe v. Wade abortion decision, Abortion and Public Policy, and a study of the philosophy of Wilfrid Sellars, The Synoptic Vision.

Studies and Analyses in Moral Formation and Higher Education (White)

Christian Higher Education I: Adapting to a Changing World (Beckham)

The Tasks and Challenges for Faculty (Baines)

Julie Reuben, Harvard Graduate School of Education: The Origins of Our Current Dilemmas: Morality and the Development of the Modern University

Moral Formation through Literature I: The Power of the Imagination (Baines)

Natural Law in and beyond the Classroom (Fentress)

Moral Education: Secular, Sacred or Somewhere in Between? (Beckham)

The Virtues in Academia (Blume Seminar)

David Solomon, University of Notre Dame: After Formation: The Applied Ethics Revolution and Its Significance for the Contemporary University

Nonviolence and the Liberal Arts (Morrison 100)