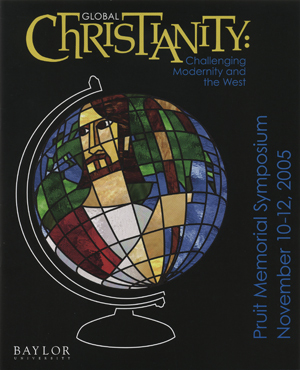 Christian movements continue to exert significant influence, not only in North America, but increasingly in Latin America, Africa, Eastern Europe, and Asia. The growth of world Christianity since the eighteenth century has confounded conventional expectations of modernity and secularization, challenged the centrality of the “West” in traditional narratives of Christianity, and presented an intriguing religious aspect of the postmodern condition. In light of these developments, this international symposium will gather historians, political scientists, sociologists, theologians, and others to discuss past manifestations and future trends of global Christianity. We are particularly interested in Christianity’s worldwide growth and its relationship to modernity/postmodernity, and Christianity’s relationship to secularization, colonization, decolonization, nationalism, internationalism, and globalization.

David Bebbington is Professor of History at the University of Stirling and Distinguished Visiting Professor of History at Baylor University. His principal research interests are in the history of politics, religion and society in Britain from the eighteenth to the twentieth century, and the history of the global Evangelical movement. His books include Evangelicalism in Modern Britain: A History from the 1730’s to the 1980’s (Allen & Unwin, 1989), Victorian Nonconformity (Plantagenet, 1992), William Ewart Gladstone: Faith and Politics in Victorian Britain (Eerdmans, 1993) and Holiness in Nineteenth-Century England (Paternoster, 2000). Edited books include The Gospel in the World: International Baptist Studies (Paternoster, 2002) and Modern Christianity and Cultural Aspirations (Continuum, 2003). He is at present working on a history of the worldwide Evangelical movement in the late nineteenth century.

Paul C. Freston is Byker Chair and Professor of Sociology at Calvin College. He previously taught for a decade at the Federal University of San Carlos in Brazil. Born in England and educated at Cambridge University, Freston also has a master's degree in Latin American Studies from the University of Liverpool and a master’s degree in Christian Studies from Regent College in Vancouver. He earned a doctorate in sociology at the University of Campinas in Brazil. His research specialties in sociology are religion, politics and globalization, and his most important work to date in that field is Evangelicals and Politics in Africa, Asia and Latin America (Cambridge, 2001). Freston is also the author of Protestant Political Parties: A Global Survey (Ashgate, 2004).

Mark A. Noll is McManis Professor of Christian Thought, Wheaton College. He also is the Senior Advisor of the Institute for the Study of American Evangelicals (ISAE) at Wheaton. In 2004-05, he held the Cary and Ann Maguire Chair in American History and Ethics at the Library of Congress’ John W. Kluge Center. Noll is an author or editor of over 30 books, among which number The Work We Have to Do: A History of Protestants in America (Oxford, 2002), The Old Religion in the New World: The History of North American Christianity (Eerdmans, 2002), America’s God, from Jonathan Edwards to Abraham Lincoln (Oxford, 2002), and the inaugural book of InterVarsity Press’ History of Evangelicalism series, The Rise of Evangelicalism: The Age of Edwards, Whitefield and the Wesleys (2004), winner of a Christianity Today 2005 Book Award.

Dana L. Robert is Truman Collins Professor of World Mission and Co-Director of the Center for Global Christianity and Mission at Boston University. Robert’s research and teaching interests span the fields of mission history, the history of world Christianity, and mission theology. Her books include African Christian Outreach, Vol 2: Mission Churches (South African Missiological Society, 2003) as editor, American Women in Mission (Mercer, 1997), and co-authorship of the textbook Christianity: A Social and Cultural History (Prentice-Hall, 1997). Her books Gospel Bearers, Gender Barriers: Missionary Women in the Twentieth Century (Orbis, 2002), which she edited, and “Occupy Until I Come”: A.T. Pierson and the Evangelization of the World (Eerdmans, 2003) were named outstanding books in mission studies for 2002 and 2003, respectively, by the International Bulletin of Missionary Research.

Lamin Sanneh is the D. Willis James Professor of Missions and World Christianity and Professor of History at Yale University. He is an Honorary Research Professor in the School of Oriental and African Studies at the University of London, and is a life member of Clare Hall, Cambridge University. The author of over a hundred articles on religious and historical subjects, Sanneh’s books include Whose Religion Is Christianity?: The Gospel beyond the West (Eerdmans, 2003), Abolitionists Abroad: American Blacks and the Making of Modern West Africa (Harvard, 2000) and Piety and Power: Muslims and Christians in West Africa (Orbis, 1996). His work as an editor includes being an editor-at-large of the ecumenical weekly, The Christian Century. For his academic work he was made Commandeur de l’Ordre National du Lion, Senegal’s highest national honor.

Brian Stanley is Director of the Henry Martyn Centre for the Study of Mission and World Christianity and a Fellow of St. Edmund’s College, University of Cambridge. He is a historian of the Protestant missionary movement and has written or edited a number of books, including The Bible and the Flag: Protestant Missions and British Imperialism in the Nineteenth and Twentieth Centuries (Apollos, 1990), The History of the Baptist Missionary Society 1792-1992 (T. & T. Clark, 1992), Christian Missions and the Enlightenment (Eerdmans and Curzon Press, 2000), and Missions, Nationalism, and the End of Empire (Eerdmans, 2003). With Sheridan Gilley he is editor of volume 8 of the forthcoming Cambridge History of Christianity: World Christianities, c. 1815-1914 (Cambridge University Press).

Pluralism and Christian Identity in Asia

Book Discussion: The Changing Face of Christianity: Africa, The West and the World

The Practice of Missions and Non-western Christianity

East Asian Responses to the West

World Christianity in the West

The State of the Chinese Church

Missions and Identity in Latin America

Eastern Orthodoxy in Comparative Perspective and Interaction with the West

Conversion and Revival in China