During the 2010-2011 academic year the Institute for Faith and Learning joined with the Graduate School to launch an intensive new initiative for graduate students: the Conyers Graduate Scholars Program. This program invites a small cohort of current graduate students across the disciplines to reflect upon the intersection of knowledge, learning, and Christian faith as they begin their journey as members of the academy. Above all, the Conyers Graduate Scholars are encouraged to explore what it means to understand their work as scholars in their various fields as a form of Christian service or a vocatio, a religious vocation. This program is born from the conviction that Baylor's best and brightest graduate students not only need instruction in the tools of their disciplines, but virtuous formation in their intellectual life and the opportunity to consider how their work as scholars intersects with their calling as Christians. 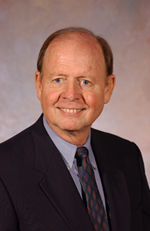 The Conyers Graduate Scholars program is named in honor of A. J. Conyers, professor of theology at the George W. Truett Seminary. Until his untimely death in 2004, Professor Conyers was a revered scholar and teacher whose ministry had a profound impact upon his students as they prepared for their own service to the church. He reflected deeply upon the meaning of calling and the intersection of scholarship and Christian faith. His writings continue to invite young scholars to consider their own calling to the scholarly life as a disciplined life in the service of God.