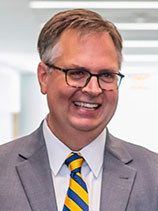 As IFL’s director, he oversees the Institute’s numerous projects, including: the annual Baylor Symposium on Faith and Culture; faculty development efforts, including Communio, a retreat for Baylor educators; and the Crane Scholars Program, a three-year mentoring program for outstanding Baylor undergraduates who are interested in the connections between faith, learning, and vocation.

His scholarly interests focus on the history of moral philosophy, virtue ethics, and faith and higher education. His articles have appeared in Christian Scholar’s Review, Journal of Moral Theology, The Southern Journal of Philosophy, International Journal of Christianity and Education, and American Catholic Philosophical Quarterly.

He also is the editor and co-author of Educating for Wisdom in the 21st Century (2019), a volume that includes contributions from David Lyle Jeffrey, Anthony Kronman, Andrew Delbanco, Celia Deane-Drummond, John Haldane, and Walter Brueggemann.

From 2016-19, he served as vice president for university mission at Baylor, helping to lead and implement the recommendations of the Spiritual Life and Character Formation Task Force, a university-wide effort to encourage and deepen Baylor’s mission and identity.

During his years at Baylor, he has taught courses on moral philosophy, philosophy of human nature, happiness and the moral life, business ethics, contemporary ethical theory, Christian ethics, and the philosophy and theology of friendship.

Beyond Baylor, he serves on the National Network Board of the Lilly Fellows Program and as a regional editor of the International Journal of Christianity and Education.

He and his wife Dr. Brenda Davis are the parents of three daughters. He serves on the board of trustees of Vanguard College Preparatory School.

An ordained Baptist minister, he served as pastor of historic Blue Ridge Baptist Church in Falls County, Texas, from 2014-21.