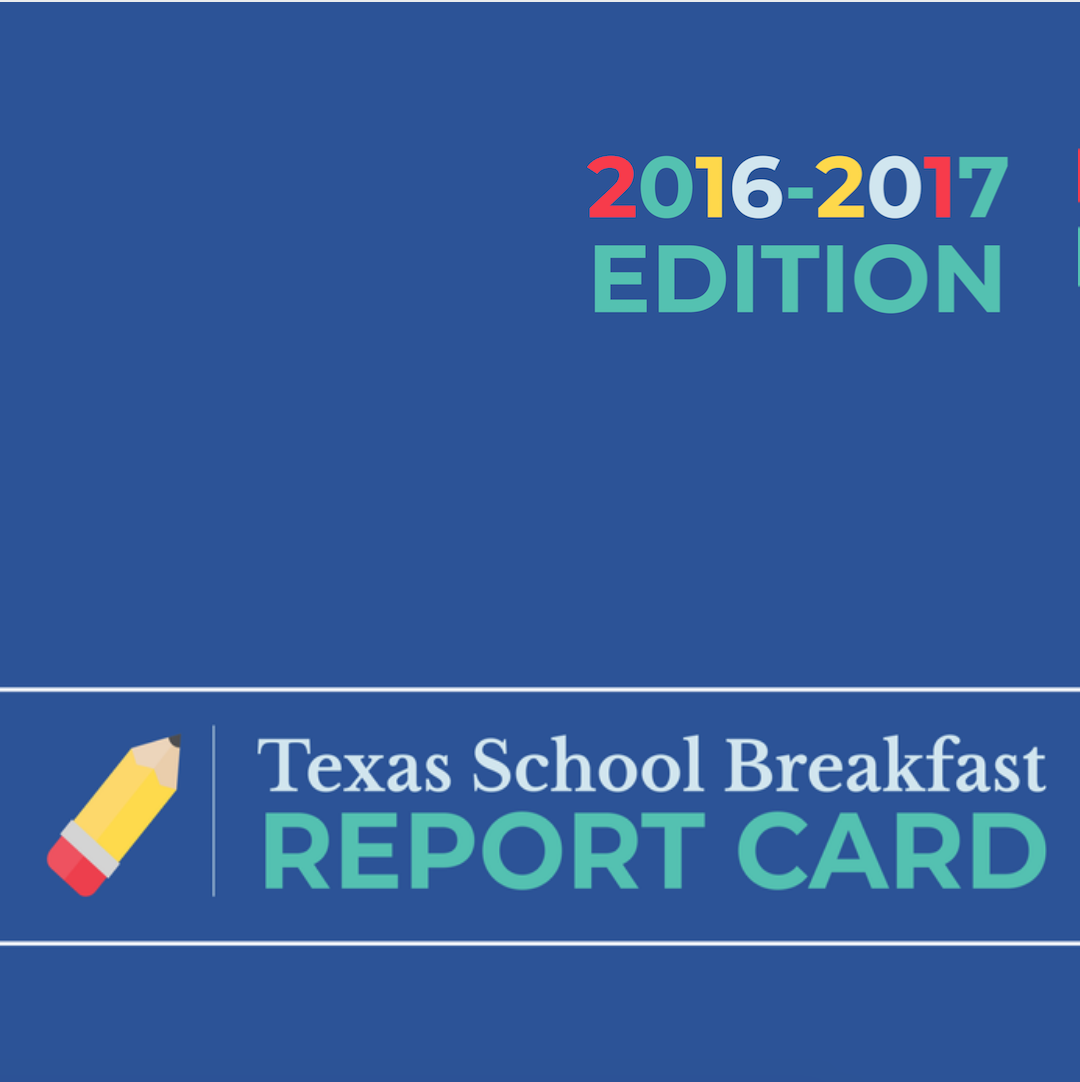 There is good news for Texas school children who start their day off with a school breakfast, according to the Texas School Breakfast Report Card produced by Baylor University’s Texas Hunger Initiative. Thanks in part to the passage in 2013 of Texas Senate Bill 376 – the “Universal Breakfast Bill” – and the implementation of alternative service models, Texas has become a national leader in school breakfast participation, moving up to 10th in the state rankings.

Released to cap off National School Breakfast Week, the 2016-2017 edition of the Texas School Breakfast Report Card captures breakfast participation data for Texas counties and more than 1,000 school districts. The report continues to be a powerful example of how data can be used to fight hunger.

“We’re able to step back and look at this data as a whole, which allows us to see which schools are having success and how to replicate that,” said Kathy Krey, Ph.D., director of the Texas Hunger Initiative. “Then we’re able to offer guidance and resources to help schools across Texas—and the U.S.—increase participation in school breakfast, improve their performance, and ultimately, reduce childhood food insecurity.”

What is the Texas School Breakfast Report Card?

Key statistics from the Texas School Breakfast Report Card for the 2016-2017 academic year:

According to the USDA Food and Nutrition Service, 314 million breakfasts were served in Texas schools in 2016-2017, which led to a $558 million reimbursement for Texas schools.
62.8 percent of students eating free or reduced-price (FRP) lunch are eating school breakfast. (NOTE: Not all children who receive FRP are food insecure.)
32 percent of public districts and charters have met the 70 percent benchmark.
Texas could reach an additional 184,000 students and accrue $51 million in reimbursement if the state met the 70 percent benchmark.
As a result of SB 376 passed in 2013, Texas has seen a 4 percent increase in school breakfast participation, serving an additional 10.5 million meals.
Recommendations for ways schools, agencies and the state legislature could increase participation in school breakfast:

Implementing alternative service models at schools, such as Breakfast in the Classroom, Grab-and-Go and Second Chance Breakfast;
Developing a statewide system to track the use of various service models;
Incorporating school meals into state plans, such as TEA’s Every Student Succeeds Act (ESSA); and
Passing Breakfast-After-the-Bell statewide legislation.
“We’re excited that we’ve seen increased participation and progress toward our goal over the last several years,” Krey said. “In particular, the increase since the Universal Breakfast Bill was passed demonstrates that, when school districts, state agencies and elected officials work collaboratively, significant change can be made. We look forward to continuing this collaboration and bringing an end to food insecurity in Texas.”

Research on benefits of school breakfast

Regular consumption of breakfast is associated with these educational benefits:

ABOUT THE TEXAS HUNGER INITIATIVE

The Texas Hunger Initiative (THI) at Baylor University is a capacity-building and collaborative project, which develops and implements strategies to end hunger through policy, education, research, community organizing and community development. THI works to make the state food secure by ensuring that every individual has access to three healthy meals a day, seven days a week. THI convenes federal, state and local government stakeholders with non-profits, faith communities and business leaders to create an efficient system of accountability that increases food security in Texas. THI’s work to increase participation in school breakfast programs is supported by No Kid Hungry. Along with its office located within the Diana R. Garland School of Social Work at Baylor, THI has offices located in Austin, Dallas, El Paso, Houston, Lubbock, McAllen and San Angelo.

Baylor University is a private Christian University and a nationally ranked research institution. The University provides a vibrant campus community for more than 17,000 students by blending interdisciplinary research with an international reputation for educational excellence and a faculty commitment to teaching and scholarship. Chartered in 1845 by the Republic of Texas through the efforts of Baptist pioneers, Baylor is the oldest continually operating University in Texas. Located in Waco, Baylor welcomes students from all 50 states and more than 80 countries to study a broad range of degrees among its 12 nationally recognized academic divisions.
Are you looking for more News?
All NewsArchives

Baylor Collaboration on Hunger and Poverty