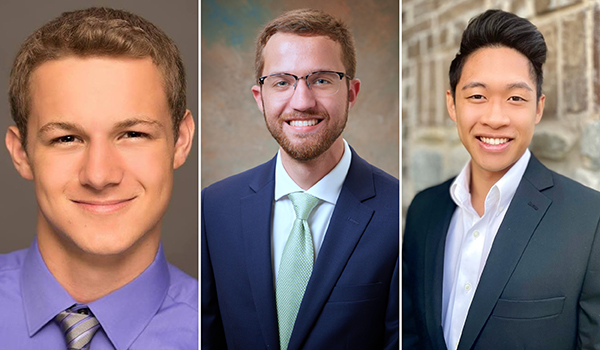 The award honors the life of Ray Wilson, beloved Baylor professor of biology, Master Teacher, and Director of the Honors Program, who directed 37 honors theses during more than 30 years of teaching at the University. Each year, the award recognizes the outstanding theses in the physical and life sciences, social sciences, and humanities. The winners are invited to return to campus to deliver remarks to Honors Program graduates.

Aker, Young, and Wong were honored during this year’s Honors Program and University Scholars banquet on April 20. The three winners received an “Outstanding” designation following their thesis defense during Honors Week in 2021.

Aker, the winner in the social sciences, graduated from Baylor in the spring of 2021 with a bachelor’s degree in corporate communication. He is currently pursuing graduate coursework in the communication department at Baylor.

In his thesis, “Trust, Collaboration, and Effectiveness in Virtual Teams”, Sam collected data from teams during a communication simulation and argued that trust is both a resilient aspect of teams and the bedrock of effective collaboration. Aker’s thesis was accepted by the International Communication Association Conference, and he will be traveling to Paris to present his research to other scholars in the field of technology and group communication.

While completing his graduate degree, Aker works part-time as a communication consultant to several prominent individuals, ministries, and organizations, such as John Mark Comer, Practicing the Way, the Maclellan Foundation, and the EFCA.

Young is currently a Ph.D. student in the History Department at the University of Notre Dame.

Wong, the winner in the physical and life sciences, graduated from Baylor with a degree in Biology and a minor in Biochemistry. During his time at Baylor Wong was a Lee R. Polk Scholar, competed nationally as a member of Baylor’s Policy Debate Team, and held positions in Baylor Undergraduate Research in Science & Technology and Alpha Epsilon Delta.

In his thesis titled, “The effect of copper on growth and the role of PCA1 expression in Saccharomyces cerevisiae cells with and without a functional nonsense-mediated mRNA decay pathway (NMD),” Wong argued that the NMD pathway differentially regulates genetic expression of proteins depending on their environmental conditions. In particular, the gene PCA1, which encodes a protein responsible for metal detoxification, differs in NMD regulation in the presence of cadmium instead of copper. Various conclusions in his thesis provide a deeper understanding of how humans respond to metals and potential treatments for related diseases that may be facilitated as a result.

Angelo is currently working as a Student Health Advocacy Program Coordinator for Genesis Physicians Group during his gap year before attending Sam Houston State University College of Osteopathic Medicine in the Fall of 2022. He plans to pursue mentored research projects in cardiothoracic and transplant pathology or molecular cell biology.

Each winner and thesis director will have their names engraved on a nameplate affixed to the F. Ray Wilson Award for Best Thesis plaque that hangs in the Honors Program suite in Morrison Hall.