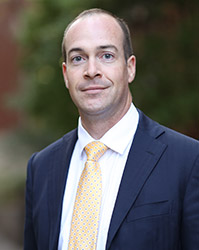 Douglas Henry is Dean of the Honors College. He holds a BA in religion from Oklahoma Baptist University and an MA and PhD in philosophy from Vanderbilt University. Dean Henry has taught students in all four of the Honors College programs in courses covering everything from Homer's Iliad to twenty-first-century great books such as Marilynne Robinson's Gilead and Cormac McCarthy's Road.

The former director of Baylor’s Institute for Faith and Learning (2001-08), he also served six years as the live-in master of Brooks Residential College at Baylor (2007-13) and co-director of a summer abroad program, Baylor in Turkey and Greece (2011-19), in which his students walked the dusty plains of Troy, sailed the wine-dark seas of the Aegean, stood atop the Areopagus, and marveled at Hagia Sophia. With Gretchen Van Dyke (University of Scranton), Dean Henry is a mentor for the Lilly Graduate Fellows Program, a national initiative supporting Ph.D. students interested in teaching in church-related higher-education.

Married to Michele L. Henry, professor of choral music education and director of the music education division at Baylor, he is the father of a sixteen-year-old son, Zachary. Dean Henry enjoys cycling, running, college football and basketball, reading, and traveling. He is deeply engaged in the local community, showing the usefulness of philosophy for life by developing a small pocket neighborhood, The Cloister at Cameron Park, and by backing Waco's new, community-based bookshop, the highly anticipated Fabled Bookshop & Cafe.

Letter From the Dean