Queen and Her Court

One of the highlights of Baylor's Homecoming festivities is always the crowning of the Homecoming Queen. Today, young women are selected as Queen and members of the Homecoming Court based on interviews by three judges, who are appointed by the Baylor Chamber of Commerce. But it hasn't always been this way.

Originally, Baylor selected the Homecoming Queen based on the quality of the float on which she rode. Queen candidates of the 1930s and 1940s were also judged on beauty, but the candidate’s personal score counted only 25 percent toward the winning total. The float counted the rest. Separate judging panels rated floats and queens, and their combined scores determined one winner – the winning queen candidate rode the winning float in the parade.

Floats were judged on originality, rather than elaborateness, while queen candidates were judged on qualities like beauty, poise, graciousness, and charm. The queen and winning float were named at halftime of the Homecoming football game. 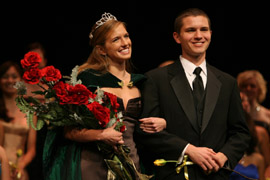 In 1973, the parade float and queen awards were separated, and young women began to be selected based on four categories: beauty, poise, personality, and campus involvement. Today, the women who have been nominated by their organizations for Homecoming Queen are interviewed by a campus panel where they discuss scholarship, philanthropy, spiritual commitment, and poise. Each category may be awarded up to 10 points and an additional 10 points may be awarded by the judges in a "bonus" category for qualities not specifically named. The candidate coming closest to a perfect score of 50 is named Homecoming Queen.

Baylor's first Homecoming Queen, Elaine Cross Roberts, was chosen in 1934. A queen has been named every year since then except in 1943 and 1944, when Homecoming activities were suspended because of World War II. A University-published Homecoming history claims that the 1952 queen, Pat Barfield Johnson '53, was the most famous queen because she was chosen from a hundred nominees by U.S. soldiers in Korea as "The Homecoming Queen We'd Most Like to Come Home To." The 1962 queen, Janet Pitman Bagby '65, made Baylor history as the first nominee of the Freshman Class to be selected – an honor yet to be repeated. Perhaps the most inspiring Homecoming Queen was 1986 honoree Beth Nance Smith '87, who had overcome bone replacement surgery and eighteen months of chemotherapy for bone cancer to continue her Baylor education.

The rich history the Homecoming Queen tradition remains an excellent way for Baylor to recognize the young women who live out the mission of the University.