Mass Meeting welcomes our first-year students to Homecoming and features the retelling of the story of the Immortal 10 and the presentation of the Eternal Flame. The story of the Immortal Ten reminds us that we each have a unique responsibility to care for and value one another as individuals and collectively as the Baylor Family.

More than 90 years after the tragic event, Baylor students still honor the names of 10 students who died in a bus-train accident on January 22, 1927, in Round Rock, Texas. From Jack Castellaw to William Winchester, the Immortal Ten are alphabetically presented as their story is told at the annual Mass Meeting. Following Mass Meeting freshmen gather on Fountain Mall to build the Homecoming Bonfire.

Facts about the Immortal Ten Memorial

History of the Mass Meeting

In a way, this tradition started with a set of scrapbooks from Elizabeth "Bess" Autrey Jennings, the wife of football coach and athletic director Morley Jennings, who produced the Chapel period on Monday, January 23, 1928--the school day closest to the first anniversary, brought large scrapbooks in memory of the dead students.

During the regular anniversary of the tragedy, a memorial service was held for the Immortal Ten. For the next three years, Baylor held a similar memorial Chapel service, but the practice seems to have ended after President Samuel Palmer Brooks's death in 1931. By the wreck's anniversary in 1940, January 22 had effectively ceased to be a date of special observation on the Baylor calendar.

Enter the Mass Meeting, held in the fall of each year to kick off Homecoming activities. Described as having begun in 1928 in memory of the Round Rock victims, the event was staged to promote school spirit among freshman men by reviewing Baylor traditions and ideals. In 1947, following the cancellation of Homecoming during World War II, the Immortal Ten story entered a golden era of prominence and innovative presentation. That year the Mass Meeting, held on Thursday night, October 30, in Rena Marrs McLean Gymnasium, was "conducted by the yell leaders and dedicated to the Immortal Ten," the Lariat reported. The next morning the story was told in Waco Hall during Chapel, primarily for the benefit of Baylor's female students who remained excluded from the Mass Meeting. 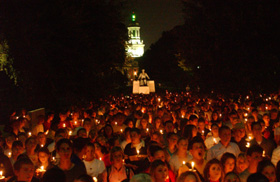 During the next two decades, the one-two punch of Mass Meeting and Chapel presentations continued to keep the story dramatically alive. During the 1960s, the Mass Meeting became the tradition's primary home, with the creation of a separate Women's Mass Meeting in 1967, held the night before the men's gathering.

In 1972, the men's and women's meetings were merged, and in 1974 the event was moved from Marrs McLean to the hillside at the Baylor Marina after complaints that the wax drippings from hundreds of lit candles had damaged the gym's polished floor and grandstands. In the 1990s, the Mass Meeting moved again, this time to Waco Hall, and 10 p.m. was established as its regular starting hour. But throughout such changes, the annual gathering's focus has remained on the Immortal Ten and the unifying Baylor spirit they represent.

For several years, former Baylor football coach Grant Teaff has participated in the event--speaking about Baylor spirit and traditions--and Neil Knighton '75, MA '78, has told the story of the Immortal Ten.

As a student, Knighton had been a member of Baylor Chamber, and he felt the group's close connection to what happened in Round Rock in 1927. Two of those who died were Chamber members, and another had been elected to join Chamber the week before the accident. Perhaps it's natural that members of Chamber, steeped in Baylor's traditions, would feel the power of the Immortal Ten. But what significance do other Baylor students find in a 75-year-old story?

"One of the issues I try to bring out in my closing is that we don't make heroes out of these guys," Knighton says. "They are your roommates, or the friend across the hall, or the quiet guy that's a good athlete that maybe isn't the most popular guy on campus. These were kids just like the ones you're sitting next to tonight. The hero is the spirit of the Baylor tradition, and what we celebrate is acknowledging one another as important. Tradition is bound up in our relationships that we carry on for a lifetime. The stories help us enhance those relationships. That is the Baylor tradition."

The Eternal Flame has been a revered part of Homecoming since 1947—honoring the lives of the Baylor basketball players, known as the Immortal Ten, who were killed in a bus-train accident in 1927. Originally, the flame was housed in a metal canister known as the smudge pot, which was handed down to the incoming class as a symbolic welcome into the Baylor Family.

Homecoming begins every year with the Freshman Mass Meeting where freshmen are told the story of the Immortal Ten. At the conclusion of the meeting, the Flame was handed to the freshmen to safeguard.

In 2009, the tradition evolved from the passing of the smudge pot to the passing of a torch in honor of the immortal words of former Baylor President Samuel Palmer Brooks: "To you seniors of the past, of the present, of the future, I entrust the care of Baylor University. To you I hand the torch."

As part of Homecoming 2015, Baylor University and the Baylor Chamber of Commerce unveiled a six-foot by nine-foot artistic structure to immortalize the university’s Eternal Flame tradition.