The Baylor Bears take on the BYU Cougars in this gridiron battle.

Throughout the decades of Baylor football competition, Baylor fans have shown their spirit in support of our "Bruins bold" donning their green and gold to root the home team to victory. The centerpiece of the entire Homecoming weekend, the football game serves as the epicenter of Baylor pride where the entire Baylor Nation rises up in one voice: "Sic 'em Bears!"

The first Homecoming game crowd in 1909 numbered nearly 5,000 people, and seniors wore their caps and gowns to the game. While the dress code has relaxed since then, some alumnae still grab the opportunity to purchase a new fall outfit--determined to wear it even if the temperature soars.

Another thing that's changed several times is the location. Carroll Field was the on-campus site of the first football game, but games have also been played at the Cotton Palace and at Waco Stadium. A campaign launched after World War II resulted in the construction of the 50,000-seat Baylor Stadium, with the first game played there in 1950. The Bears christened the facility with a 34-7 victory over the Houston Cougars, following soon after with a 27-20 defeat of Texas A&M that November--a tradition that bears repeating. Many improvements have been made in the stadium facility over the years, and the name was changed to Floyd Casey Stadium in 1989.

Today, football games are held at McLane Stadium. Originally named "Baylor Stadium," the facility's name was changed to McLane Stadium in December 2013 to honor Baylor alumnus and business magnate Drayton McLane, Jr., who provided the lead gift in the fundraising campaign for the stadium construction. Baylor's first game at McLane was played August 31, 2014, with the Bears defeating SMU 45–0. The stadium has a capacity of 45,140 spectators and was designed to be expandable to a capacity of 55,000 as future needs require. McLane Stadium replaced Floyd Casey Stadium as the home field for the Baylor Bears football program. 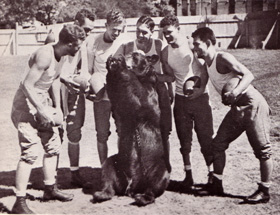 Speaking of names, back in 1909, Baylor was not yet the Bears. Though involved with intercollegiate athletics since the 1890s, the school went without an official mascot until 1914, when President Samuel Palmer Brooks held a student body vote to choose a mascot and an alumnus, George Gaines "Kit" Rosborough, offered a $5 gold piece to the winner. It's a bit scary to think what we might have been--buffalo, antelope, ferret, frog, and bookworm were all finalists-but the bear won handily.

The U.S. Army Engineers gave the university its first bear, when they were leaving Waco's Camp MacArthur following World War I. And thus began the tradition of live mascots on campus--lovingly cared for by bear trainers from the Baylor Chamber . A big black bear named "Joe College" made his debut at a Baylor football game in 1925 and he lasted until 1943. Joe's been followed by a string of mascots through the years.

And what would a football game be without a band? The first Baylor band, formed in 1902, had 17 members. For several years, the band remained under the auspices of the ROTC program. In 1929, the band became known as The Golden Wave after a 10-day tour through Texas in their new gold uniforms.

Now under the direction of Dr. Isaiah Odajima, the Baylor University Golden Wave Band entertains at halftime, keeps the spirit going throughout the game, and accompanies the crowd in the fight song and school song.

Helping to rouse the Baylor spirit are also the Baylor Yell Leaders (first formed in 1920), aided by the spirit organization the Baylor Line, a group of enthusiastic freshmen who sit in special seating at home football games--right on the 50 yard line--behind the opposing team's bench. 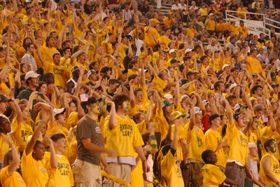 In 1960, the yell leaders introduced another tradition--the Bear Claw hand signal and "Sic 'Em, Bears" yell. Though the initial reaction by student body and faculty was mixed, the tradition took hold after Grant Teaff arrived as head football coach in 1972. Teaff employed the yell and signal, and their use expanded throughout university life. Now most any group of Baylor supporters will hold their claws up when they sing the alma mater, "That Good Old Baylor Line."

The first version of that song in 1907 had the same title as today's school song, but the sentiment was quite different--as it threatened to send opponents home "done up in turpentine." In 1931, Enid Eastland Markham wrote the more dignified lyrics that we sing today.