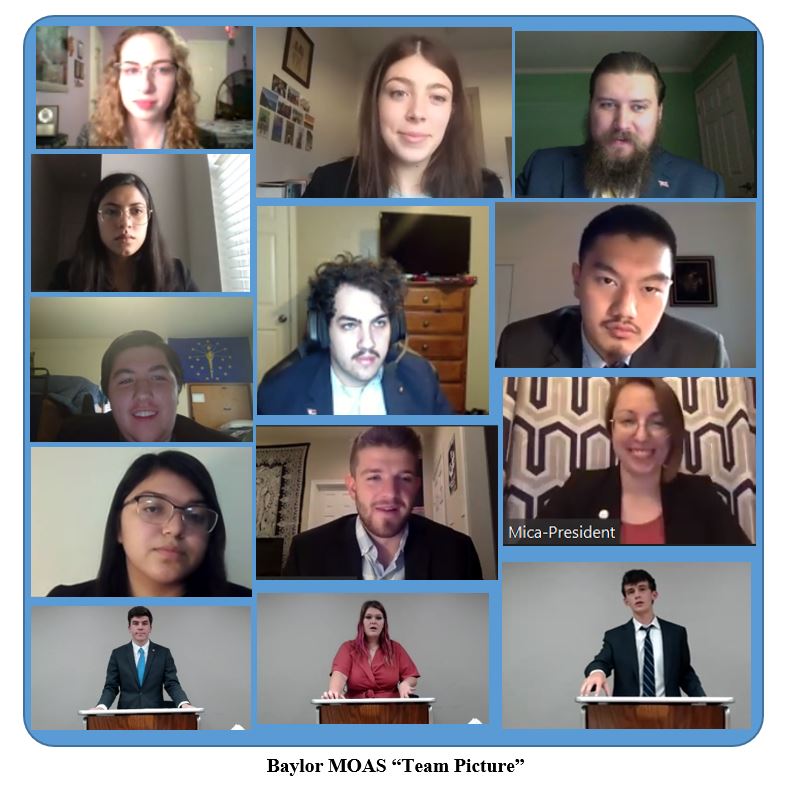 Despite the challenges of working in the Covid-19 era, Baylor’s MOAS team not only managed to complete a full slate of activities, but also did it in Baylor style. In September, the team hosted a virtual Parliamentary Procedures Conference on campus. Over 90 students representing ten universities, including three from Mexico, attended a selection of eleven different workshops on October 3 (http://esmoas.org/index.html). Workshop topics included parliamentary procedure tips, moot court instructions, judging criteria, and how to Zoom effectively in debate. After the workshop, Baylor students continued to hone their skills by working diligently on producing well researched and written position papers, line items for declarations, state and petitioner memorials for moot court, and papers for the academic conference. They also practiced their speeches, arguments and debates in the Zoom format.

On November 13-14, the MOAS and Moot Court team attended a Zoom conference, sponsored by St. Mary’s University. The Summit consisted of 16 teams, from 12 universities, including three Mexican universities: Universidad Regiomontana, Universidad Anáhuac, and Universidad Nacional Autonoma de México. In the simulation of the Summit of the Americas, Baylor represented the countries of Mexico and Costa Rica. Baylor’s two Moot Court teams argued a hypothetical case for two days in a five stage elimination from the Inter-American Court of Human Rights in front of a panel of six judges rotating judges.

In the Summit, teams covered four different virtual committees. The General Assembly, composed of Heads of State dealt with setting a new five year agenda for the Americas. It also issued an emergency declaration pledging hemispheric unity in the face of a crisis scenario: a terrorist attack on the headquarters of the Organization of American States in Washington, D.C. Second Committee crafted a declaration to combat Racism and Systemic Inequality. Third Committee wrote a statement on balancing hemispheric security with individual human rights. Fourth Committee developed a Plan of Action to increase government participation and voter turnout among unrepresented groups. All committees had to pass their declarations by consensus, giving rise to spirited debate in committee.

Erin Franklin (senior, International Studies and Spanish, from Llano, TX) served as Head Delegate for the Costa Rica team. In awards decided by the judging committee: she won the Stegall Award for Diplomacy, and Outstanding Position Paper Section. Her team also won the Secret Mission Delegation Award for promoting unity and cooperation in all committees. In awards decided by committee vote, Erin Franklin received the Distinguished Delegate award for the General Assembly, and Colin Keele (junior, Political Science and History, from Woodway, TX) received the Distinguished Delegate award for Third Committee.

In this year’s summit, Michaela Scott (senior, University Scholar, from Cape Girardeau, MO) served as President and chair of the General Assembly for which she won the Outstanding Chair award. She will also be presenting a section of her thesis at the Academic Conference held November 20. Acceptance at this conference guarantees her a publication next year in the conference proceedings. Camryn Lutes (junior, Political Science and Philosophy, from The Woodlands, TX) served as chair of the Third Committee and the judges awarded her the Parliamentary Procedures Award. David Bryant, (senior, History, from Justin, TX) served as the Technical Services Chair. Dr. Joan Supplee, Professor Emeritus of History, organized the teams.

St. Mary’s University in San Antonio, TX will host the 2021 Summit marking the twenty-fifth anniversary of the Eugene Scassa Model Organization of American States program. Elections this year to determine officers for that model selected Camryn Lutes as the President–elect, Logan Butler as the Secretary-General-elect. A faculty committee selected Colin Keele as Chair of the Third Committee for 2021.

The entire MOAS program participants would like to thank Baylor University for its continued support as we enter into our twenty-fifth year of competition. We would especially like to thank the College of Arts and Sciences and the Center for Global Engagement for its support and use of facilities as we adjusted to the Covid-19 pandemic and the Tidwell transition.