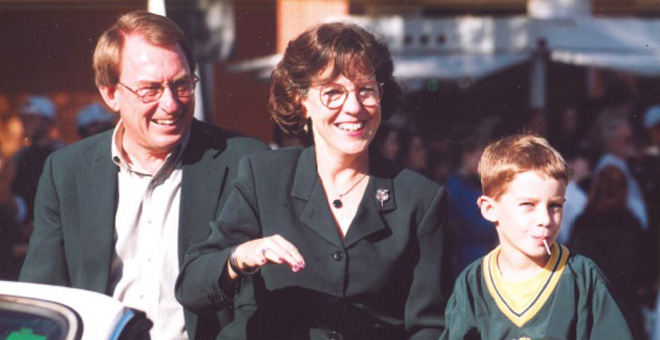 Judy Carlisle Schmeltekopf has been on a college campus almost her entire life. Growing up in Alabama, Judy lived in the shadow of Howard College - a Baptist college in Birmingham now known as Samford University.

"It was a wonderful place to grow up. I walked through that campus to go to elementary school," Judy says. "My church was the college church, so my Sunday school teachers, my choirmaster, my Girl Scout leaders were all professors at Howard."

As a result, Judy and her family were very active in Baptist life. But, instead of following her sister's to Judson College - a small, Baptist school and one of the nation's oldest women's colleges - Judy decided to go in a different direction.

"I didn't choose to go to a women's college," she says. "At the time Texas Christian had a program in ballet, so I came to TCU on a ballet scholarship."

"What I found was that TCU, like Howard, had a campus directly connected to the church," she says. "And even though it is affiliated with the Christian Church, I became involved in at University Baptist Church and in the Baptist Student Union."

It was through her connections with the BSU that she would meet Don Schmeltekopf.

"Somebody at Southwestern Baptist Theological Seminary introduced us during student week at Glorieta, New Mexico," she says. "We had dinner, and I felt a real connection. But, we were only in Glorieta for a week, and I was afraid we would lose touch."

But, there were other factors in play. In Don's senior year at Baylor, he began working with Hardy Clemons at the First Baptist Church of Georgetown. Clemons had been Judy's BSU director at TCU.

"I think one of the first things Hardy told him when he visited the Clemons' home was you write that girl a letter," Judy says. "Sure enough, within a few days I received a letter from Don on Hardy's stationery."

After their wedding, Don began seminary first in Austin, then in North Carolina before earning Ph.D. from Drew University in New Jersey.

"After a year at TCU, I changed my major to elementary education," Judy says. "So, I taught while Don was in school."

"I taught several years in public school, and I loved it," she says. "Then, in New Jersey, I began to work on a Master's degree in Montessori education. I taught in the teacher training program, supervised teachers, and helped start a couple of schools in New Jersey."

At the same time, she and Don had four children.

"It seemed we were always juggling," she says. "I would stay home with the baby, take the older ones to school with me, and help out where I could."

For Judy, Montessori education and Don's connections between faith and learning worked hand-in-hand.

"We saw education very similarly," she says. "We were both concerned with the development of the whole person."

After Don's appointments to Mars Hill and ultimately Baylor, Judy remained involved in education, both in the continued development of Montessori programs and in higher education.

"I always wanted to make sure teachers were getting the best training," she says. "And, of course, Don would find something for me to do - whether that meant working on campus beautification projects or partnering with student and women's groups."

"We are very proud of our Baptist heritage, and we are proud that our children chose to attend Baptist schools," she says. "Raising a family or working in education - it's teamwork. That's how I've always thought of it. It's teamwork, and really that's the Christian way of doing things."