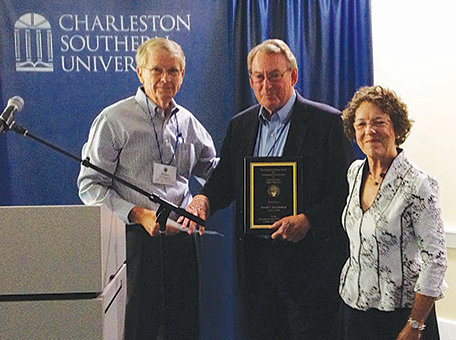 Mike Arrington (left), retiring executive director of the International Association of Baptist Colleges and Universities, with Donald and Judy Schmeltekopf.

The award is given to a person who has made a significant contribution to Baptist-related higher education. The award recognizes Charles D Johnson, who authored Higher Education of Southern Baptists and who served as chairman of the Southern Baptist Education Commission from 1932 to 1953. Johnson’s career from 1916 to 1962 included positions as professor, department chairman, dean and president at Ouachita Baptist College (now University), Arkansas Agricultural and Mechanical College, Blue Mountain College and Baylor University. In addition to honoring the memory of Johnson, the award is a means of publicly recognizing individuals who have demonstrated a commitment to Christian higher education through Baptist-related institutions.

Mike Arrington, retiring executive director of the IABCU, praised Schmeltekopf for his long and faithful service to Baptist-related higher education and to the Association as a former board member and as board chair from 1998-1999. Through the annual “Seminar on Academic Leadership in Baptist Universities,” held on the Baylor University campus, Schmeltekopf has trained more than 250 administrators for their work at Baptist colleges and universities.

Schmeltekopf earned a bachelor of arts degree from Baylor in 1962, a master of divinity degree from Southeastern Baptist Theological Seminary in Wake Forest, N.C., and a doctor of philosophy degree from Drew University in Madison, N.J. He also has done postdoctoral study at Princeton University.

After fifteen years of service in various higher education settings in New Jersey and New York, Schmeltekopf worked as a program officer for the National Endowment for the Humanities in Washington, D.C., and then served as vice president and dean of the faculty at Mars Hill College in North Carolina from 1985-1988, and provost from 1988-1990. He came to Baylor University in 1990, serving for one year as vice provost, and then provost from 1991-2003. From 2003-2006 he was The Hazel and Harry Chavanne Professor of Christian Ethics in Business, and in June 2006 became the director of the Center for Ministry Effectiveness and Educational Leadership. He continues to teach business ethics in the Hankamer School of Business.

As a scholar-teacher and academic administrator, Schmeltekopf has maintained an active professional life in higher education circles, including being co-editor of five books. One of these is entitled The Future of Baptist Higher Education (2006), published by Baylor University Press. In addition, he was selected as an American Council on Education Fellow in Academic Administration in 1982-1983, and as a participant in the Institute for Educational Management at Harvard University in the summer of 1994.

Schmeltekopf is an active Baptist churchman. He and his wife, Judy, are members of DaySpring Baptist Church in Waco, Texas, where he is the coordinator of an adult Sunday school class. They have four children and six grandchildren.