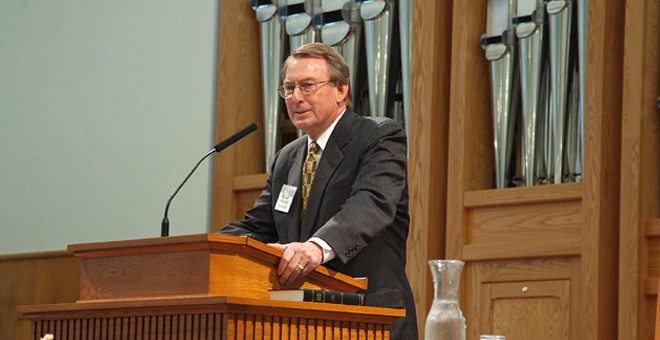 When Don Schmeltekopf joined Baylor in 1990 as vice-provost then as provost in 1991, two important ideas were brought to the forefront.

The first had to do with the undergraduate curriculum. As he had done at Mars Hill, Schmeltekopf focused on revamping Baylors academic core curriculum.

"We originally called it optional, and it was just five or six courses," Schemltekopf says. "But, it was the foundation for what is now BIC - the Baylor Interdisciplinary Core."

This renewed focus on the humanities combined with a reconnection with core texts led to the formation of Baylor's Honors College and sowed the seeds for the Great Texts program established a decade later.

Schemltekopf's other idea proved to be revolutionary.

"The way it had always been expressed at Baylor was an excellent education in a Christian environment," Schmeltekopf says. "Which is fine, but it has little to do with learning. It's more cultural."

"From the very beginning, we were thinking of something bigger," he says. "We were interested in the integration of faith and learning. And we felt it began with the faculty and administration."

In his second year at Baylor, Schmeltekopf assembled a small group of ten professors and administrators who would meet once every third week for an entire year. Together, they developed a list of thirty questions that addressed all aspects of life, faith, and learning.

"Basically, we were trying to get to one thing," Schmeltekopf says. "We wanted to know what it truly meant to be a Christian university. Was it just a cultural thing? Or could it be something integral to the entire university?"

Each year, another group of ten was chosen to participate in this discussion. Over time, the number of Baylor's leaders working toward a Christian intellectual vision reached a critical mass, with revolutionary results for Baylor. The project of developing a Christian intellectual vision at Baylor became the centerpiece of Baylor 2012 and its imperatives for excellence. Don's role in the development of 2012 was crucial. The visionary document boldly claimed that the highest intellectual excellence is fully compatible with orthodox Christian devotion. Under 2012, Baylor moved forcefully to expand and enhance its research infrastructure and productivity while privileging and integrating its Christian mission in relation to the goals of the University. As part of the Vision 2012 process, Schmeltekopf published The Future of Baptist Higher Education, co-edited by Dianna Vitanza. That book expanded on many of the themes in 2012 and documented that essential to Don's vision of the future was the expansion of graduate education at Baylor and a renewed partnership with the International Association of Baptist Colleges and Universities (IABCU).