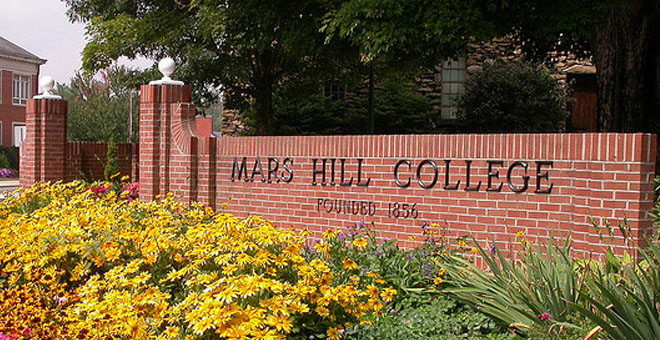 "When I got to Mars Hill, the academic program and specifically the core curriculum had some problems," Schmeltekopf says.

Mars Hill College, near Asheville, North Carolina, brought Schmeltekopf onto campus as vice president and dean of faculty in 1985. For Schmeltekopf, the position was the right place at the right time.

"When I worked for the National Endowment for the Humanities (NEH), I helped Catholic University of America with a grant," Schmeltekopf says. "They wanted funding to help develop their Catholic intellectual tradition. Being Catholic was just who they were, they were proud of it, and I thought that was pretty neat. When I went to Mars Hill, I saw it as a similar situation."

Using external funding, Schmeltekopf helped develop a core curriculum that integrated liberal education and the college's Christian heritage.  As an advocate for the integration of faith and learning, it was just a matter of time before the world's largest Baptist university took notice.

"I partnered with a few other administrators at historically Baptist colleges because we really wanted our alums to be more involved in Baptist life," Schmeltekopf says. "Specifically in the Southern Baptist Convention, but also in sustaining Baptist higher education. Of course, we wanted Baylor to be involved."

Schmeltekopf drafted a sample letter that he hoped Herbert Reynolds, the president of Baylor at the time, would consider sending to the presidents and alumni directors of all the Baptist colleges in the South. The letter asked the alums of these schools to engage in the preservation of a vital Baptist culture, but Schmeltekopf wasn't sure what kind of response his request would receive.

"Well, to my surprise Reynolds sent it out," Schmeltekopf says. "As a result we got to know each other pretty well, and it wasn't too long after that he asked me to join his staff."

Schmeltekopf left Mars Hill in 1990 and served Baylor as its provost until 2003.