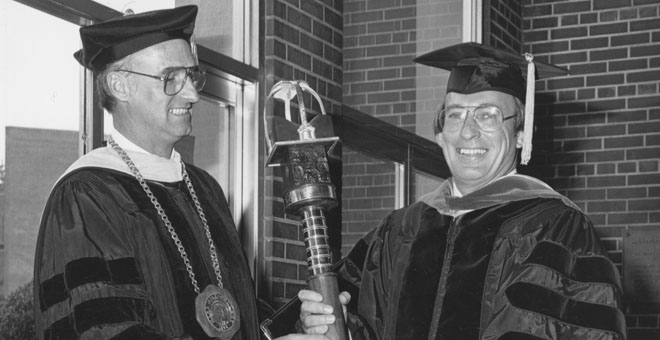 After a year at Austin Presbyterian Theological Seminary, Schmeltekopf felt the need for a change.

"There were great people there, but it was different," Schmeltekopf says. "I'm a Baptist. I felt it was important to be a part of Baptist life."

"My two older brothers graduated from Southwestern in Fort Worth," he says. "This was one time that Texas wasn't big enough."

After earning a Masters in Divinity, Schmeltekopf pursued a Ph.D. at Drew University in New Jersey. Schmeltekopf completed his dissertation on Puritan thought and the American political system, and began looking for opportunities to work in higher education. One of those was a post-doctoral fellowship at Princeton University in 1978.

"College programs at the time were undergoing a tremendous amount of reform," he says. "There was a need to strengthen the core curriculum. Colleges were looking for ways to connect learning across disciplines and were trying harder to develop the inner lives of their students. It's something I wanted to be a part of."

After teaching at Union College in New Jersey, Schmeltekopf took a position with the National Endowment for the Humanities (NEH). For the next two years, Schmeltekopf worked directly with colleges large and small, helping promote an education anchored in the liberal arts.

"As I saw it, there was a decline in the humanities," Schmeltekopf says, "both in the number of courses being taught and the number of people who were willing to go into the profession. Through my position at NEH, I was able to do something about it."

Ultimately, Schmeltekopf's work at NEH drew the attention of colleges looking for administrators, and in 1985 was offered a position that would permanently establish him in Baptist higher education.