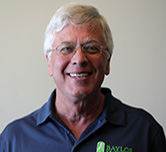 Dr. Driese joined the Baylor faculty as the Chair of the Geosciences Department in August 2004, serving until 2013. After serving briefly as Graduate Program Director (2013-2016) he was appointed Associate Dean for Research in the Graduate School. Prior to coming to Baylor he taught at the University of Tennessee-Knoxville (1982-2004). He obtained his B.S. degree from Southern Illinois University in Carbondale, and his M.S. and Ph.D. degrees in geology from the University of Wisconsin-Madison.

Dr. Driese has published over 150 peer-reviewed journal articles and his research areas include reconstructing past landscapes, climates and atmospheric chemistry from fossil soils, which are known as “paleosols”. His research investigations involve both field and laboratory components, and use modern soils as analogs for interpreting paleosols. He is a Fellow of the Geological Society of America and the American Association for the Advancement of Science, and is an Honorary Member of SEPM (The Society for Sedimentary Geology).