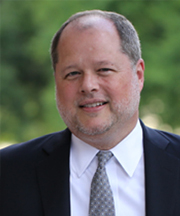 Dr. Trevathan earned his bachelor’s degree in chemistry in 1977 from Lipscomb University, where he was salutatorian and president of student government. In 1982, he received his master’s degree in public health from Rollins School of Public Health at Emory University and his medical degree from the Emory University School of Medicine. He completed residencies and post-doctoral fellowships at Yale-New Haven Medical Center, Yale University School of Medicine; and Massachusetts General Hospital and Boston Children’s Hospital, Harvard Medical School. After serving as an Epidemic Intelligence Service Officer at the Centers for Disease Control and Prevention (CDC), Dr. Trevathan held faculty appointments at Emory University, University of Kentucky, and then at Washington University in St. Louis, where he was associate professor and then professor of neurology and pediatrics in the School of Medicine.

A practicing pediatric neurologist, Dr. Trevathan has provided academic leadership as director of the Pediatric Epilepsy Center and director of the Division of Pediatric and Developmental Neurology at Washington University in St. Louis, which has been among the nation’s top universities in extramural research funding. He also was Neurologist-in-Chief at St. Louis Children’s Hospital, where he oversaw a large division of academic pediatric neurologists and Ph.D. researchers.

From 2007-2010, Dr. Trevathan was director of the CDC’S National Center on Birth Defects and Developmental Disabilities. As a member of the senior leadership team, Dr. Trevathan was responsible for many of the CDC’s activities in areas of child development, maternal and child health, genetics, blood disorders, birth defects and developmental disabilities. At SLU, Dr. Trevathan has led a college that includes five departments that cover the range of public health sciences, health management and policy, as well as the School of Social Work and programs in criminology, biosecurity and global health. SLU’s College of Public Health and Social Justice offers graduate and professional degrees, as well as five undergraduate majors.

Dr. Trevathan has served on a variety of committees at the National Institutes of Health, CDC, the Institute of Medicine and the World Health Organization that impact child health, maternal health and neurological disorders. While at CDC, he also served as the strategic lead for the pediatric response to the 2009 H1N1 flu epidemic. His global health experience includes public health, research, education and development projects in Honduras, Democratic Republic of Congo, Uganda and China. He has published widely in child neurology and neuroscience, epidemiology and public health.