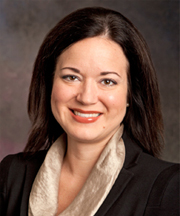 As senior vice president of planning and marketing, Irvine brought together more than 80 members of Methodist's administration, medical staff, board of directors, and community to create the system's first-ever comprehensive strategic plan. She was also instrumental in planning our first major expansion in more than 25 years, an 80-bed hospital in Mansfield with a nearby imaging center and doctor's office complex.

Irvine's accomplishments have been recognized by several professional organizations with awards such as the inaugural Young Healthcare Executive of the Year award by the Dallas-Fort Worth Hospital Council, the Up and Comers award by Modern Healthcare magazine, and the Early Career Healthcare Executive Regent's Award from the American College of Healthcare Executives in 2012, D CEO Most Influential Business Leaders 2015, Methodist Dallas and Irvine were honored by inclusion in the Becker's Hospital Review list of "100 Leaders of Great Hospitals" and was included in Becker's Hospital Review' in the 2012 and 2013 list of "Women Hospital and Health System Leaders to Know."