President and CEO, The Perryman Group 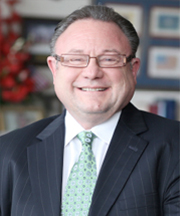 Dr. Ray Perryman is President and CEO of The Perryman Group, an economic research and analysis firm based in Waco, Texas.

He holds a B.S. in Mathematics from Baylor University and a Ph.D. in Economics from Rice University. He always felt that the B.S. would have been somehow more appropriate for Economics and has spent his life proving it. He took his first economics course on a coin flip between economics and psychology. If it had gone the other way, there might be some really messed up people in the world. In addition to his earned degrees, Dr. Perryman has received an honorary doctorate from the International Institute for Advanced Studies. After that one, he told his kids they had to start calling him "Doctor Doctor." They preferred dork, dweeb, nerd and loser (on a good day).

Dr. Perryman has held numerous academic positions in his career including 10 years as Herman Brown Professor of Economics and five years as University Professor and Economist-in-Residence at Baylor University, as well as five years as Business Economist-in-Residence at Southern Methodist University. He has authored several books and more than 400 academic papers, and has served as President of both the Southwestern Economic Association and the Southwestern Society of Economists. He also lives in Odessa while working in Waco, is the father of five young Texans (ages 27-32, although some temporarily reside elsewhere) and the grandfather of one, gets lost on his own block, and once ran one of his cars into the other one. His current academic roles include Senior Research Fellow of the IC2 Institute of the University of Texas and Institute Distinguished Professor of Economic Theory and Method at the International Institute for Advanced Studies. His duties in these positions include many things, but work is not among them.

In the professional arena, Dr. Perryman has authored more than 2,000 trade articles, publishes a subscription forecasting service and a monthly newsletter, writes a weekly syndicated newspaper column, hosts a daily radio commentary, and appears regularly on National Public Radio. His firm engages in a broad range of complex projects for major corporate and governmental interests and has served the needs of more than 2,000 clients. In other words, he is an obsessive-compulsive workaholic.

Dr. Perryman has been called a "genius" by The Wall Street Journal, a "world class scholar" by Business Week, the "unofficial state economist" by The New York Times, "the most quoted man in Texas" by Texas Monthly, and, his personal favorite, "the state’s premiere barbecue connoisseur" by The Dallas Morning News. What his wife has called him can’t be repeated in mixed company.

Dr. Perryman has been honored by The Democracy Foundation for his role in promoting capitalism in China, The Asia and World Institute for promoting international trade and academic exchange, and the Systems Research Foundation for his contributions to the field of modeling (that would be "economic" modeling, not "fashion" modeling; he seems to think there might be some confusion.) He has also received the Lifetime Achievement Award from the International Institute for Advanced Studies. He was skeptical about that one. He was afraid that a Lifetime Achievement Award was something you received just before you croaked. He has never played in the NBA.

Dr. Perryman has received citations from governments around the world, presidents, governors, Congress, and national and state administrative and legislative bodies, and has been nominated for the Bank of Sweden Prize in Economic Sciences in Memory of Alfred Nobel (Nobel Memorial Prize in Economics). He has received far more citations from the Texas Department of Public Safety.

Some of his most gratifying work has been in the field of economic development, where he has played a key role in the creation of hundreds of thousands of jobs. He is pleased that, at long last, some of his kids actually hold some of those jobs. He is a past recipient of the Outstanding Texas Leader Award and has been honored by the Texas Legislature for his "tireless efforts in helping to build a better Texas." Most recently, Dr. Perryman has been selected as the 2012 "Texan of the Year" by the Texas Legislative Conference, received the 2013 Baylor University Distinguished Service Medal, and was inducted into the Texas Leadership Hall of Fame in 2014. He is also an honorary Kilgore Rangerette, but his high kick leaves a lot to be desired, so he is not yet on the traveling squad (but there is always next year)!